This is one of my favorite photos from the 90s. I thought I had only made one print of this (which hangs on my desk at work), but just discovered another print stashed away, and thankfully perfectly preserved. I developed the film and processed the print myself. My notations on the back of the print show that I used a C-40, M-100, Y-150 filter on the enlarger and exposed the paper for 8.5 seconds at f/5.6. The print was developed on April 9, 1996.

Here's the story behind the shot: I was camping in Big Meadows Campground at Shenandoah National Park. I was awakened by a strange sound -- it sounded like someone blowing air on the tent. With bleary eyes, I unzipped the tent door and saw a deer a few feet away. The deer kept sneezing. (I guess deer can have spring allergies, too.) I grabbed my Minolta Maxxum 5xi and tried to catch the deer in mid-sneeze. I was only able to take one frame before the deer ran off and the moment was over.

I didn't know whether I had captured the shot until I developed the film. I have to say I like everything about this shot -- the gesture, the framing, the depth of field, the grain, the chaotic interplay between flora and fauna.. And wow, I forgot how much I loved pure black and white photography. Desaturating color photos is missing a certain je ne sais quoi, isn't it? I'm glad I had a chance to work directly with black and white film. 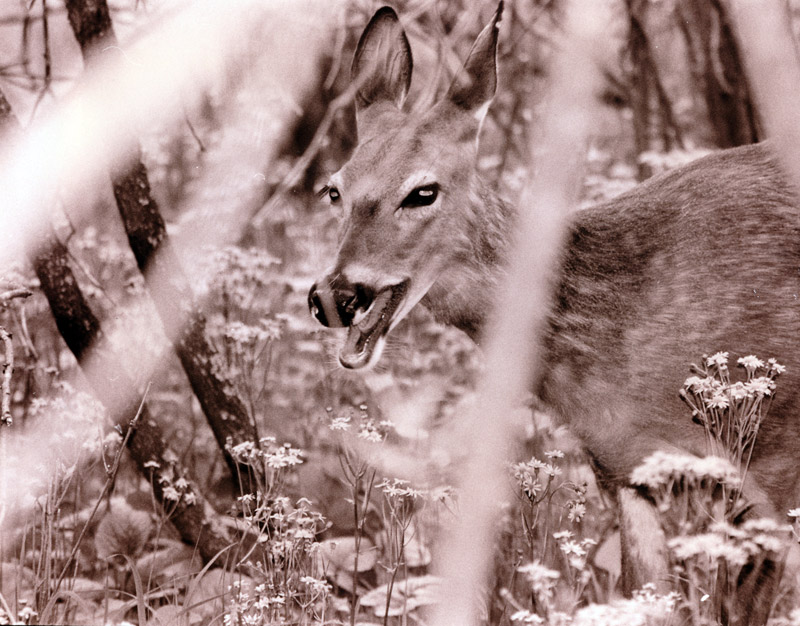