Scan of the Day: Dusting Off some Old DCSki Code 🔗

DCSki.com, one of my many side projects, traces its roots to the early days of the web. Its technical underpinnings have been uprooted on multiple occasions since the late 90s. In the early days, every page on the site was static. Every link had to be maintained manually. Changing the look and feel of the site required editing hundreds of separate files. Not much fun.

That got old fast. So I soon jumped to a magic technology called "server side includes." Portions of static pages could include portions of other static pages; this allowed some content to be centralized in one place.

Soon thereafter, I re-coded DCSki in the Perl language. When someone visited a page on the site, some Perl code was executed to dynamically generate content. I was cleaning some old files and came across this printout of some very early DCSki code, written in Perl. A list of news stories was stored in a flat text file, and this Perl parsed through that file to pull out relevant stories and then create HTML on the fly based on them. 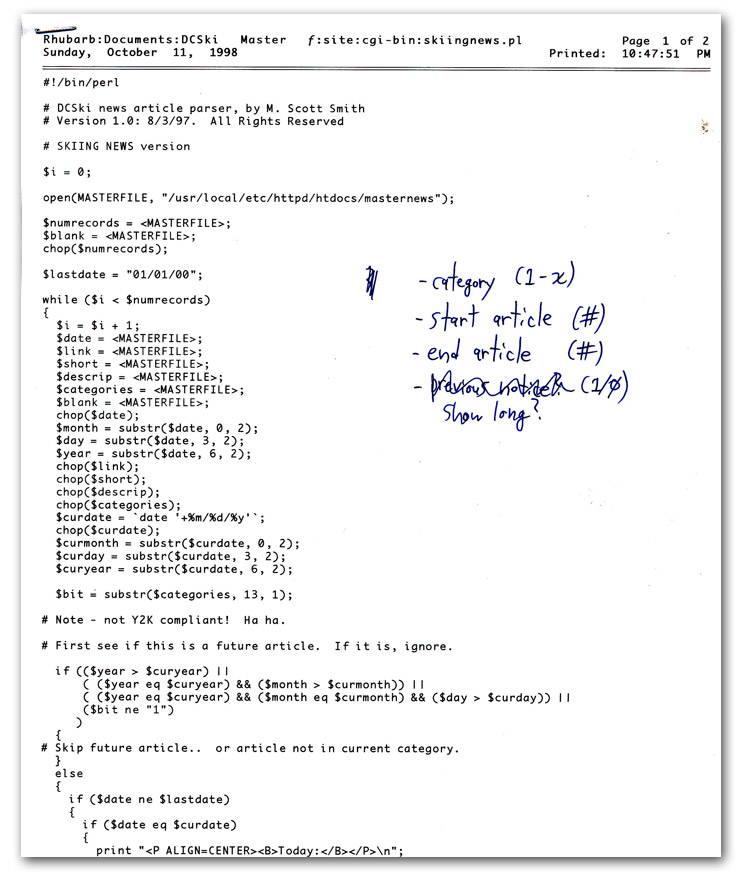 From the comments, I can see that I had a cavalier attitude about the code not being Y2K compliant.

As an interpreted language, Perl wasn't very fast, and I decided to re-code everything in compiled C code. This dramatically sped up the performance of each page. I think 1997 is the last time I programmed in Perl.

But the code didn't stay in C for long. Open source databases such as MySQL became popular, and the PHP programming language, geared towards web development, took off. I embraced these technologies and continue to use them today. A continuous evolution has moved nearly all content on DCSki from static pages into a dynamic database. This makes everything much easier to maintain and provides additional flexibility.

But, nothing stays the same for long. This summer, I hope to once again remodel DCSki from top to bottom. Perl probably won't be part of that transformation.