Behind the Scenes at the 24 Hours of Snowshoe 🔗

The "24 Hours of Snowshoe" mountain bike race was held in June, 2003, and I was on-hand covering the event for DCSki. This race pits teams ranging from one to four people in an around-the-clock race. 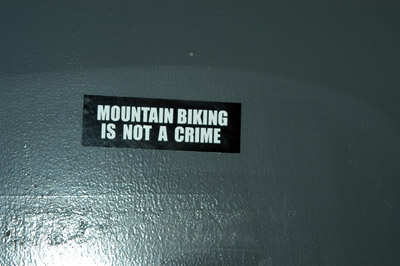 This bumper sticker was affixed to a stairwell door in the Silver Creek Lodge. I've been yelled at by a ranger for riding my mountain bike along a paved trail in Harper's Ferry. So I suppose I can empathize; "the man" is definitely against us mountain bikers. But let it be known: I am completely against defacing the stairwells of private property with witty bumper stickers.

Let it also be known that this was the first time I had taken a photo of a stairwell door, and hopefully the last time. 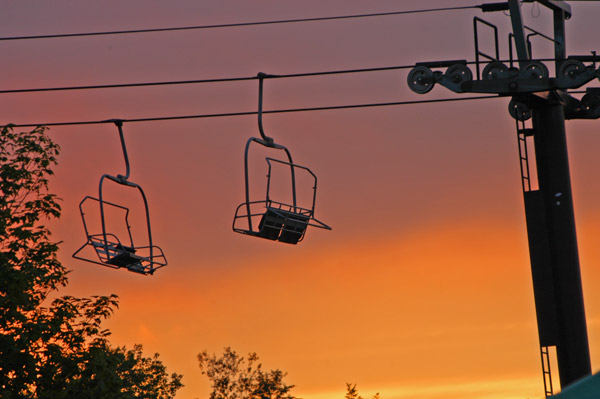 I arrived at Snowshoe on Friday evening before the first day of the race, just as the sun set. The race was held at the Silver Creek area of West Virginia's Snowshoe Mountain Resort, and I find few things more depressing than seeing a chairlift in the summer. 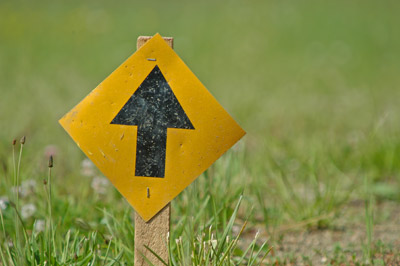 These markers define the trail. (When it's not obvious by the muddy singletrack and trampled flowers.)

It had rained quite a bit before the race. Sections of the course were quite muddy. This made some mountain bikers (and camera-wielding journalists) a little unhappy, but hey, mud happens. 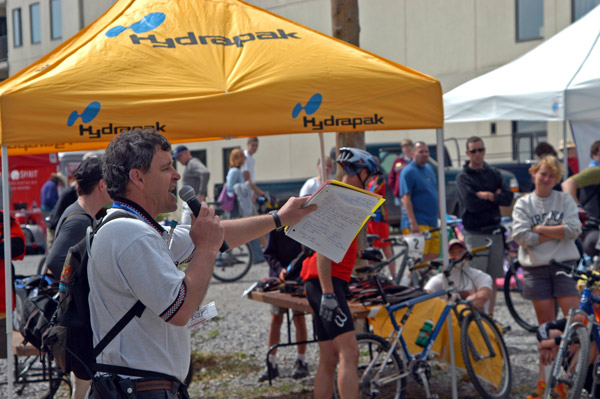 That's Laird Knight, speaking into the microphone, and he's the head of Granny Gear Productions, which sponsors the Snowshoe race. The 24 Hours of Snowshoe was originally the 24 Hours of Canaan, held at Canaan Valley Resort in West Virginia. The event moved to Snowshoe several years ago. Granny Gear also hosts races in Temecula (California), Tahoe (California), and Moab (Utah). 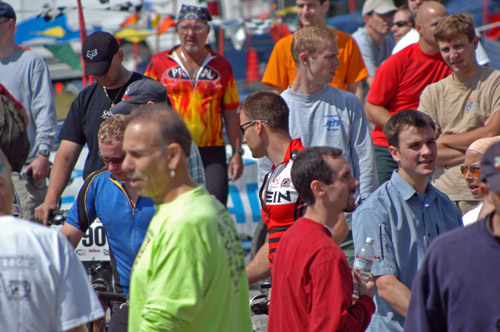 Spectators mingle about as they wait for the race to begin. The 24 Hours of Snowshoe race has attracted as many as 10,000 spectators. 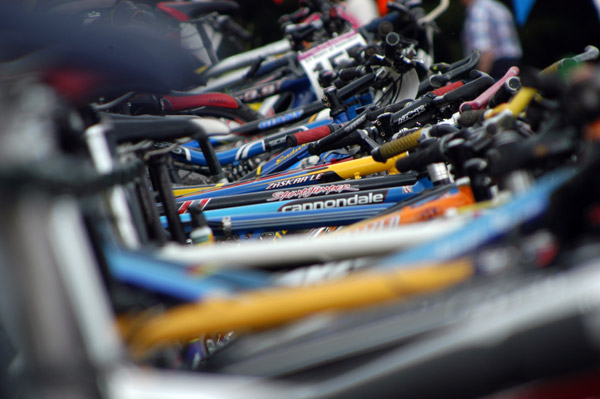 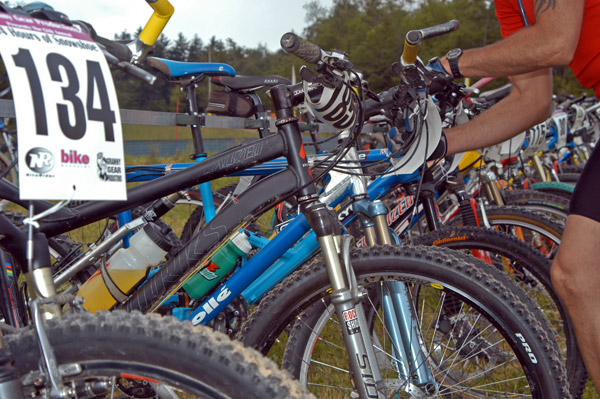 A sea of mountain bikes at the base area waits patiently for their riders to take another lap. The course is a few miles in length and covers some very technical terrain: steep climbs (and descents), singletrack, fire roads, and a fair share of roots and other obstacles. And, nearly every year, mud is a major factor. During 2003's race, the organizers made a last minute decision to reduce the size of the course to eliminate a loop that was deemed too muddy. After a few hours, sections of the course became quite gloppy. 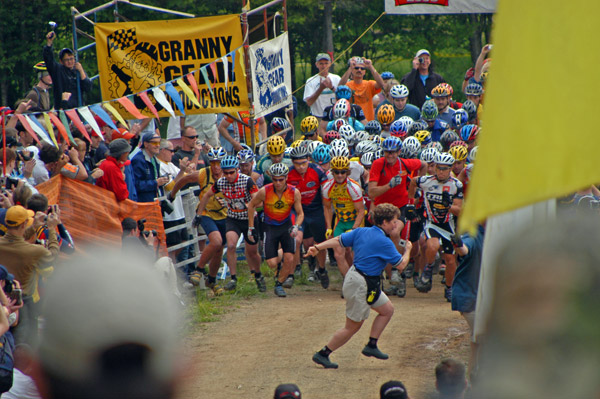 This shot was taken just seconds after the launch of the race. There are a few things to notice here. The lady in the blue shirt running for her life is Elizabeth Gillespie. She's the VP/Production Manager for Granny Gear Productions, and my primary contact for the event. You'll notice the racers do not yet have bikes. This race begins with a Le Mans-style start -- racers must first run up a short loop, then back down, before they grab their bikes. The racers are in quite a hurry. (It is, after all, a race.) As a journalist, I had an all-access pass which allowed me to position myself in some prime picture-taking spots -- such as directly in the path of the racers. Elizabeth warned us that the racers would plow down any journalist in their path at the start of the race, with extra points awarded for clobbering journalists with particularly expensive cameras and video gear. Thus, you understand the urgency Elizabeth is displaying as she darts out of the way.

What complicates the starting shots even more is that I had to run backwards, uphill, as a swarm of hundreds of anxious racers charged straight at me, all the while remembering the horror stories Elizabeth relayed from previous races. 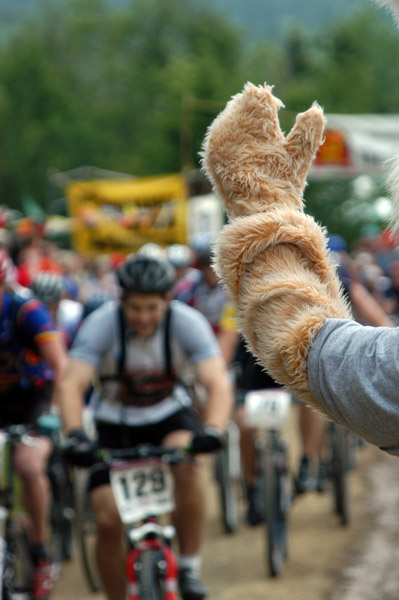 This picture probably deserves some explanation, so here goes. Yes, that is a bunny's forearm in the picture. And if you think that's bad... 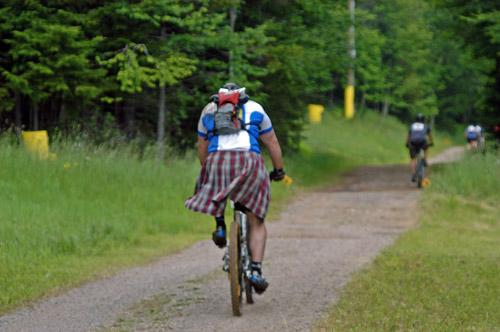 Yes, that's a racer wearing a skirt or kilt of some kind. And yes, that racer is a man. But wait, we're not done... 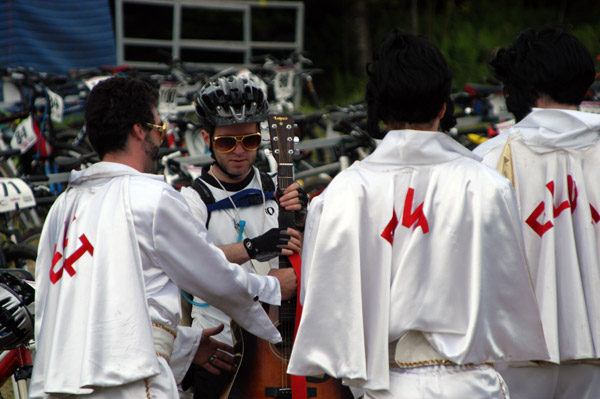 Yes, that is a group of guitar-wielding, mountain bike-riding Elvises. And I think they might have been having more fun than I. 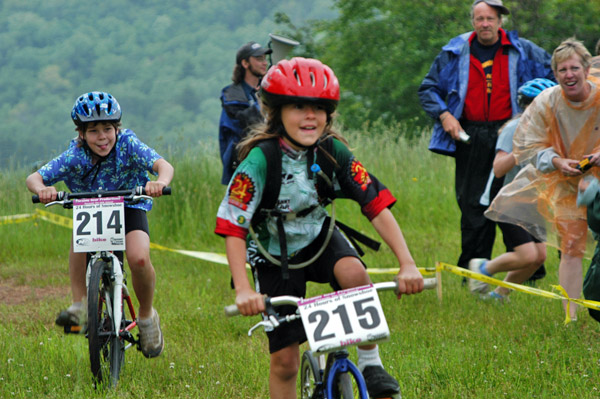 Adults don't get to have all the fun. (And really, "fun" is probably not the appropriate word for a grueling, 24-hour mountain bike race. Rather, "character building," as Calvin's dad used to say, is perhaps the more appropriate term.)

Kids get to have some fun on their own in the 24 Minutes of Snowshoe race. And this race is truly all about fun. Number 214 is quickly closing in on number 215, and I think it's hilarious that 214 is sticking her tongue out. 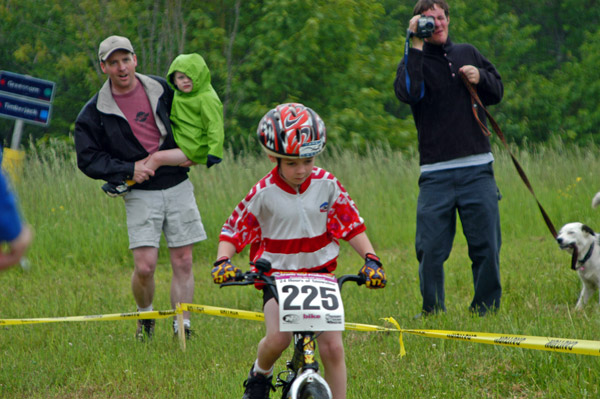 I really like this shot. You've got the dad on the left, holding a small kid that clearly is upset that he (she?) is too young to participate in the race, and wondering what all the fuss is about. Number 225 in front is taking the race pretty seriously -- and how couldn't he? After all, dad number two on the right is getting it all on videotape. But that's not the best part. No, the best part is the dog -- on the far right -- who has decided that this really is an appropriate time for tug-of-war on the leash.

Now, behind the scenes, what you can't see is that it has started to rain. I'm frantically trying to keep my camera dry, and had to keep wiping rain off the lens in between shots. 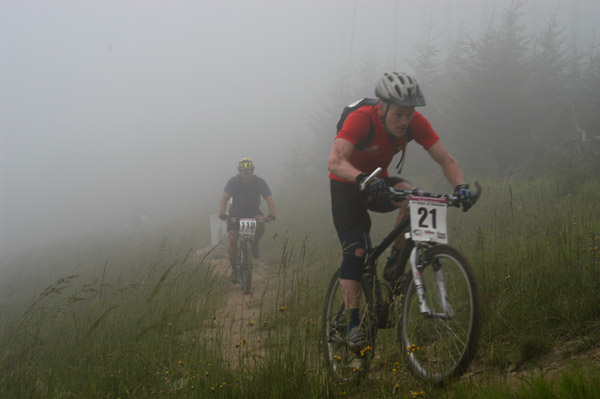 Later that night, the race really settles in. This is the top of Highwall, a very steep section of singletrack that loops and climbs up to the highest point of the course. These two riders have just made it to the top, and they're among the very few I saw that were still riding by this point. Most were walking their bikes up, out of breath.

This is a great part of the course to take pictures as the sun sets, and as bike lights begin to be flicked on in preparation for a long, cold, dark night. As luck would have it, a thick fog settled over the area, making it difficult to capture photos. (In prior years, I snapped some great night photos at this point on the course.)

A few spectators make the long climb from the Silver Creek base area to this section of the trail to cheer on tired bikers as they crest the top of the mountain. They often ring cow bells, so there's the surreal sound of cowbells echoing throughout the foggy mountaintop.

Oh yeah, it was pretty cold, too, and the wind kept knocking over my tripod. 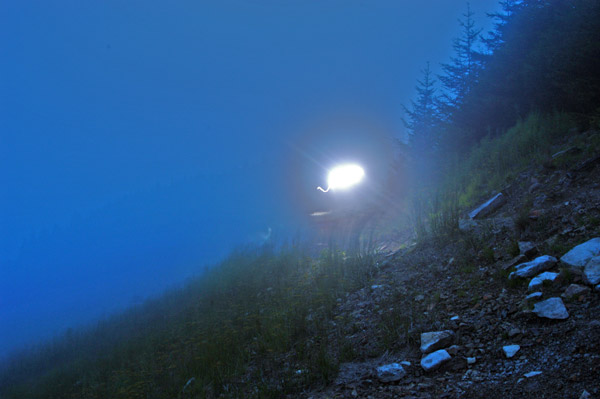 Another shot at the top of Highwall as night falls. Not a great photo, I don't think, and I blame the fog. In years past, I captured streaks of light winding their way up Highwall from the valley below with timed exposures. 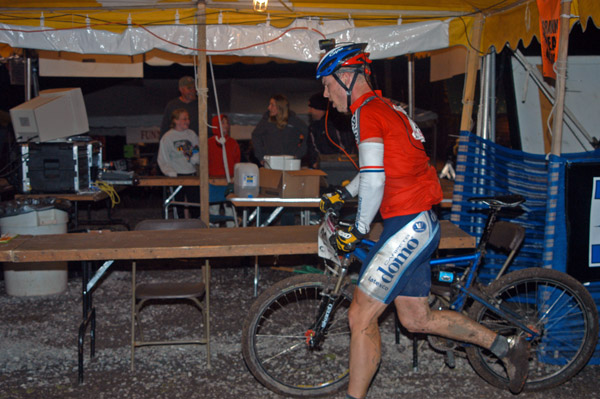 Well past midnight, and the race is still going strong. After completing a lap, a biker checks in to the registration tent. Bikers carried RFID tags, which were instantly scanned by Granny Gear into their computer system. This allowed results to be generated in real-time. Granny Gear also had an 802.11 WiFi network set up, and I frequently fired up my PowerBook to download photos from my Nikon D100 and check in with the latest lap times.

I took a total of 628 high-resolution (3,008 x 2000 pixels, minimal compression) photos during the 24-hour race. For those keeping score, that's an average of 26 photos an hour. In pre-digital days, that would have been 26 rolls of film, which would have cost at least $200 to process. I was able to post photos and race commentary to DCSki in near real-time. No, I don't miss film photography so much. 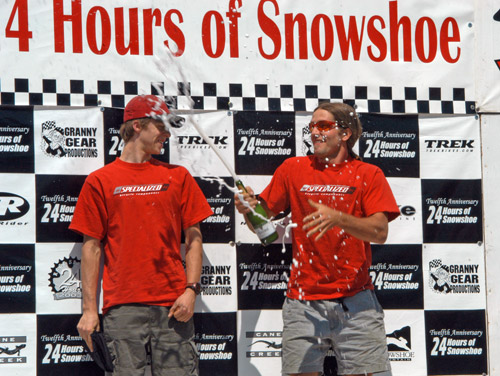 And finally, after noon on the second day, the race is over, and winners in various classes take the stage. I'm tired by this point, but know I can't hold a candle to the racers. Many teams consisted of four members, each taking turns as they tried to log as many laps as possible, but the event also included a solo men's and women's category. In the solo category, a single rider tried to clock as many laps as possible -- one right after another. Talk about grueling.

To read the story I wrote for DCSki about this event (along with even more photos), click here.