On Friday, March 13, I decided to take the day off and head to Shenandoah National Park for an afternoon of hiking and photography. 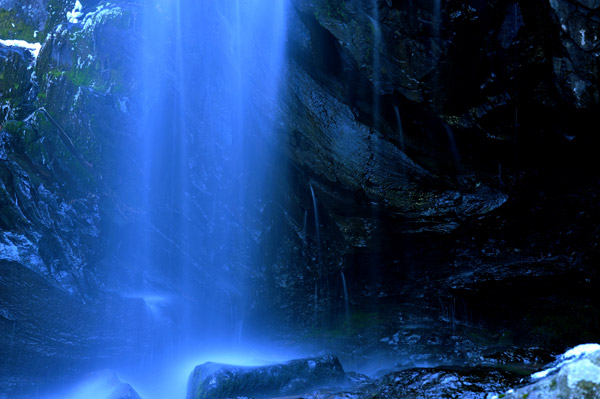 (A note about the photo above: This was a 30-second exposure taken after it was already quite dark out. I did not modify the color balance at all; this is what the color really looked like.)

After a lazy morning start, I didn't end up hitting the road until noon. Normally I head for Front Royal, but I had picked out a hike near Big Meadows, so I took 15 to 211 and headed for the Thornton Gap entrance. As I approached the fog-shrouded mountains, I saw snow clinging to the treetops. The higher elevations had received a couple inches of snow overnight, and I was ecstatic - after all, bad weather makes great photos. I had expected the leafless winter terrain to be colorless and drab, and knew that a bit of snow would make my photos much more interesting.

This excitement soon led to dismay as I approached the entrance station and saw the car in front of me turning around. A ranger at the entrance station informed me that Skyline Drive was closed due to slippery conditions; with mountaintop temperatures below freezing, there was some icing along the Drive, and more freezing precipitation was expected that evening. After driving three hours, I wasn't prepared to just turn around, and considered parking there and walking into the Park. But the ranger suggested that the southern portion of Shenandoah might open later that afternoon, if I wanted to try driving there.

"What the heck?" I thought, and headed west and then south down to the Swift Run Gap entrance. From there, I was happy to see the southern part of Skyline Drive open - the road to the north was blocked off. It was getting late, so I picked out a new hike and headed for the trailhead, starting my hike at 5 p.m.

Normally, this would not be a wise thing to do.

After all, the Park was deserted, temperatures were in the 20's, the trails potentially icy, and I was starting a hike by myself near dusk, meaning I would be hiking at least an hour or two in the dark.

But I was prepared - with plenty of layers of warm clothing, emergency gear, and ready to spend a night or two in the woods if absolutely necessary. The extra gear, combined with the heft of my metal-body SLR camera, lens, and tripod, resulted in a backpack that was quite heavy. It never seems so heavy on the way down, but most trails at Shenandoah start at the top, meaning the second half of the hike is always more strenuous than the first half.

I started hiking along a fire road, using that as a shortcut to reach the Doyles River Falls trail. I made stops at Upper and Lower Doyles falls, at times thankful for the extra layers of clothing, and at other times sweating and trying to stuff extra layers into my already-crammed backpack. The woods were very foggy, and you could see millions of dots of moisture swimming through the air. But it was peaceful, and beautiful.

After losing myself in photography for a couple hours and realizing that dark had settled over the mountain, I started the lonely hike back. I had a headlamp and flashlight, but the fog was so strong at this point that the lights largely reflected right back in my eyes.

This may be the first time I've driven along Skyline Drive and not seen deer. I didn't see any deer on the trails, either. I did see quite a few birds dancing through the trees along the hike. Sometimes we would startle each other.

Some photos from the hike follow. I had to work hard to get these shots, but I'm glad I finally captured Shenandoah in the winter season. Enjoy!

One funny thing I've noticed is that ever since I took the Photography at the Summit workshop at Jackson Hole last fall, I can't help but hear the instructors offering words of wisdom in my head. The Summit featured about a dozen famous photographers, and each day they would sit in the back room of the auditorium and critique our photos as they showed up on the big screen. They pulled no punches, and many humorous one-liners resulted. At times the instructors would bicker with each other, and at other times they would say nothing at all (not a good sign).

I bring this up, because in this next shot, I debated about the framing and composition, all the while measuring conflicting advice that instructors had given. The two trees in the foreground could constitute "visual clutter" -- they abruptly interrupt the shot and introduce conflict into it. Jay Maisel, one of the instructors, infamously called out anything he felt was clutter and used colorful terms to describe what should be done with it, encouraging us to always pay attention to the corners of the frame to make sure nothing messy snuck into it, such as an errant twig. Would he think the foreground trees were just clutter?

On the other hand, the perpendicular alignment of the trees -- where the top had fallen down perfectly parallel to the ground -- was very interesting to me and provided the opportunity for somewhat unusual framing and depth to the shot.

Yes, sometimes I do analyze a shot in this much detail. But it happens very quickly. Just as practice allows you to play the guitar better and faster, practice in photography allows you to pick out shots faster and instinctively balance a lot of variables to end up with an interesting photo. On the other hand, photography is very subjective. Maybe you find this photo cluttered. 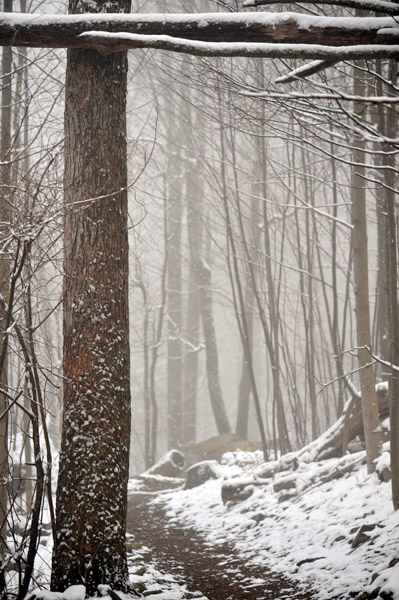 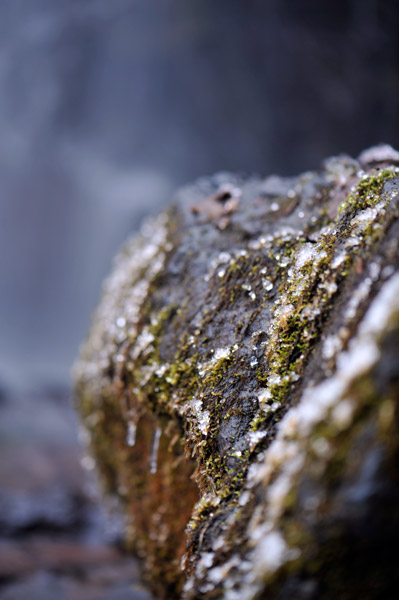 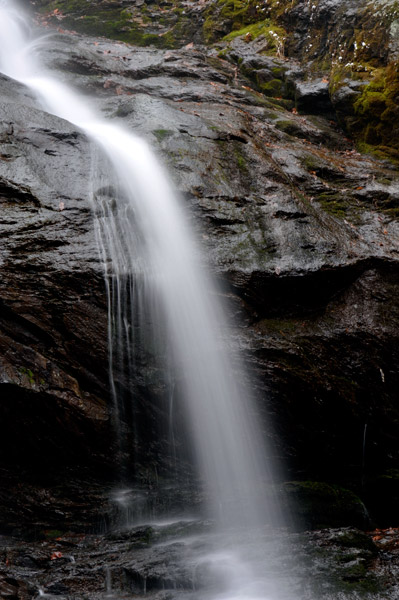 This next shot was taken with the camera upside down, mounted underneath the tripod to make it lower to the ground. (Here's an example of how that works.) This opens up interesting possibilities for shots -- I've used the technique to have the camera floating just above water, for example, with the tripod legs *in* the water -- but it makes it difficult to take the shot, too, since it becomes nearly impossible to look through the viewfinder. 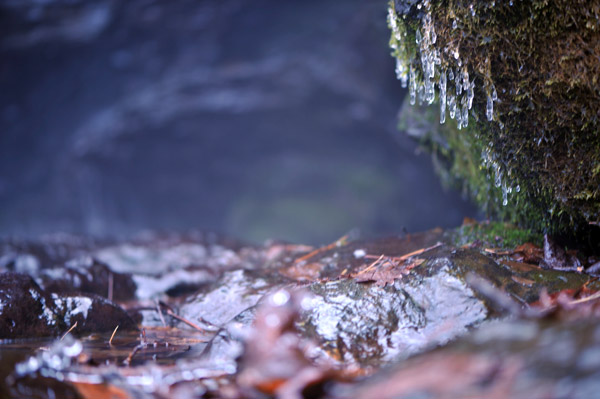 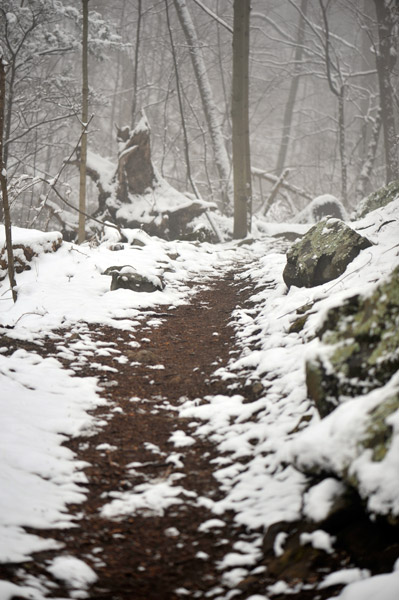 This is about the right orientation of the stone post - my camera was perpendicular to the ground. The post was leaning precipitously and pointing down slope, because the ground it was planted in appeared to have begun eroding down the mountain, with no regard whatsoever for keeping the stone post at a reasonable orientation. Erosion never rests. 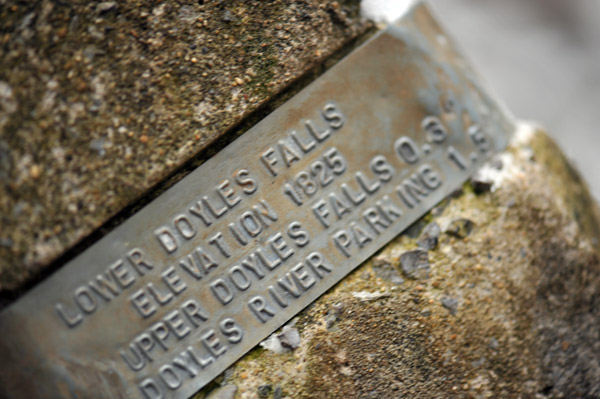 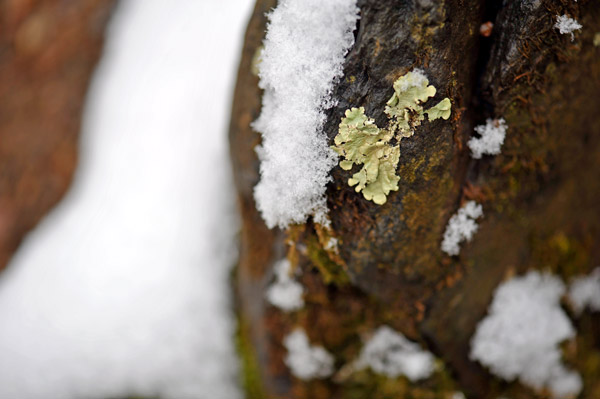 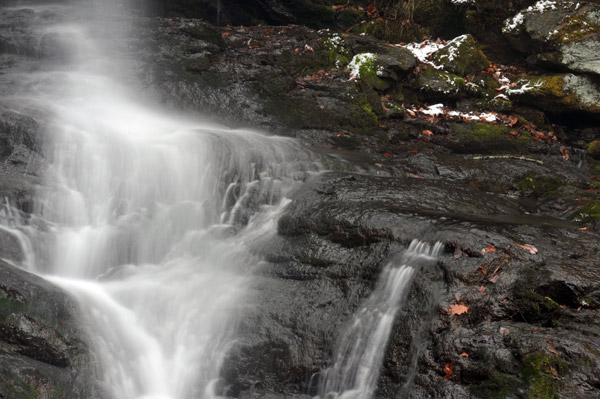 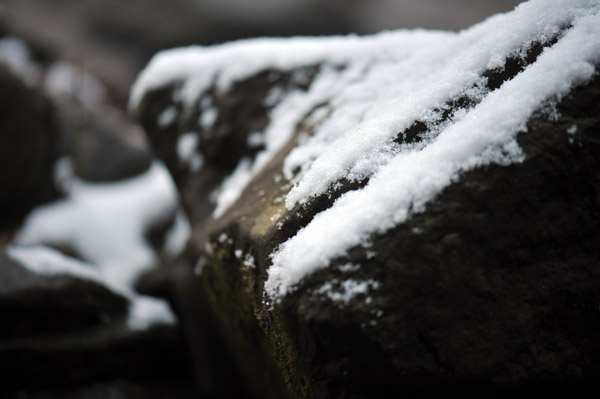 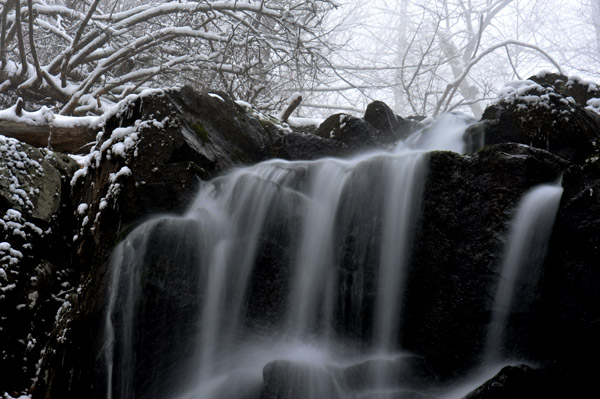 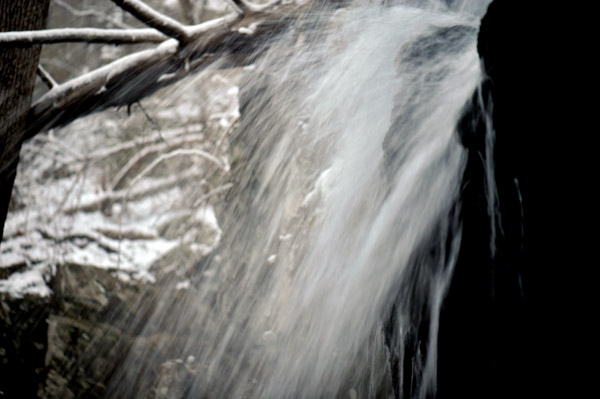 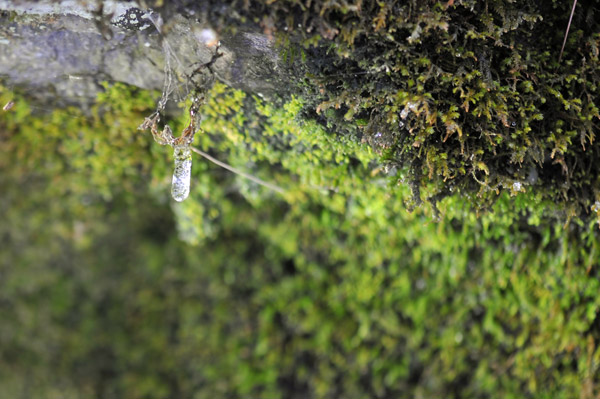 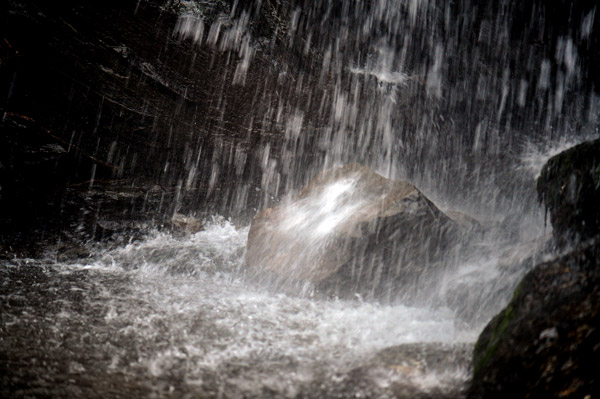 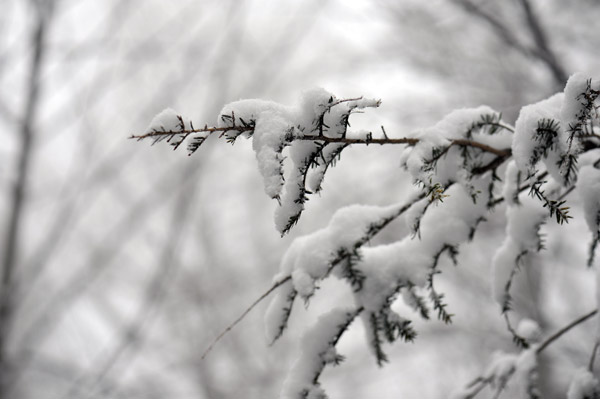 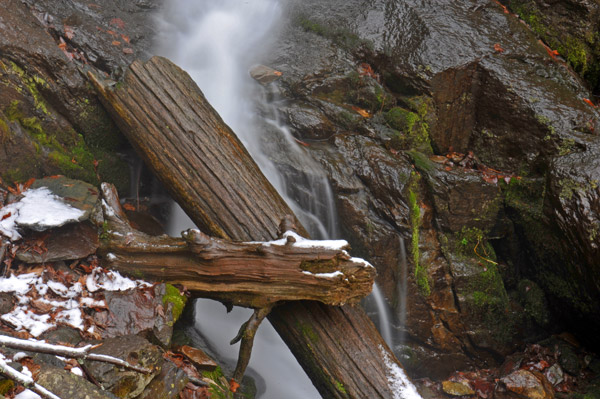 One thing I like about this next shot is that it almost looks like a black and white shot. I spent a couple years in college shooting (and developing and printing) nothing but B&W, and I have a great fondness for B&W photography. One always strives to have a balanced tonal range, with a bit of solid white, a bit of solid black, and a nice gradation of grays in between. This shot balances between these extremes nicely, from the pure white of the snow to the pure black in the bottom right corner, but nice gray detail in the water. As with most waterfall shots in this post, the exposure was 30 seconds. The aperture was f/29 on a 105mm macro lens. 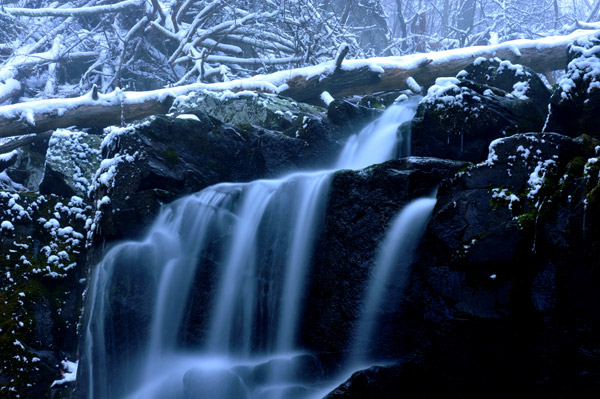 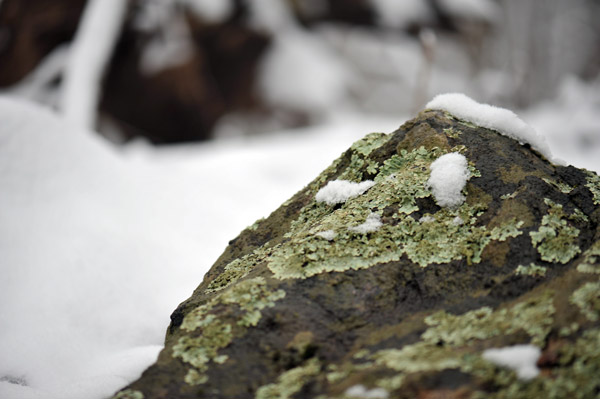 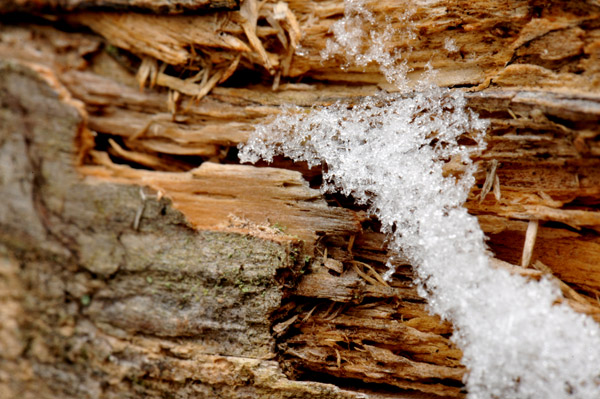 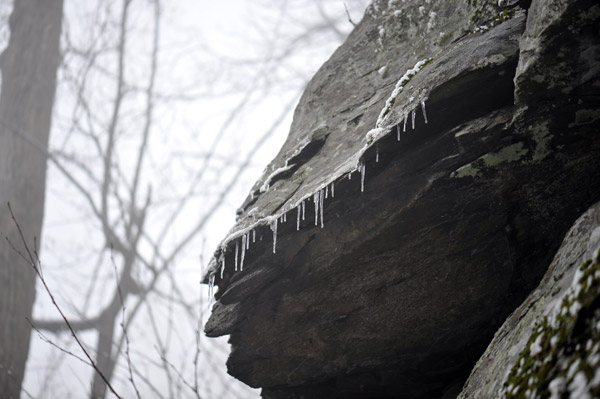 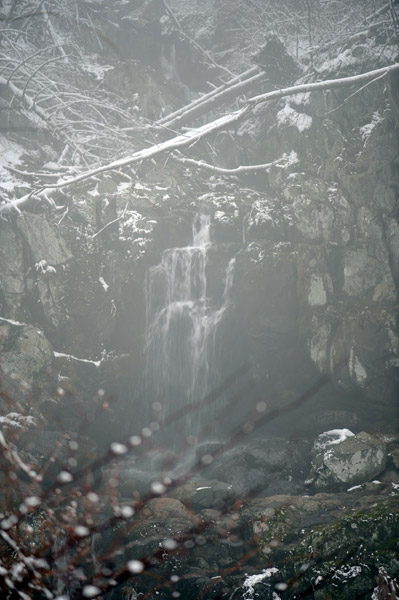 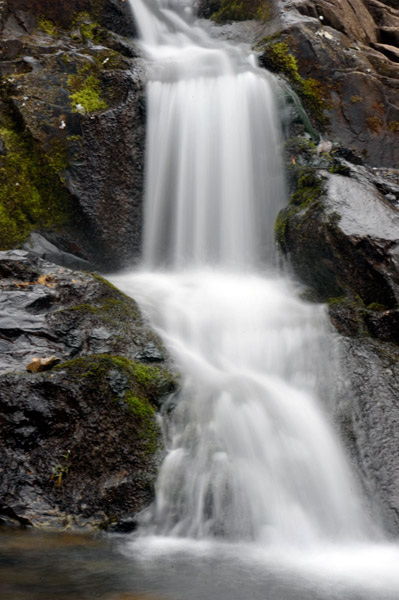 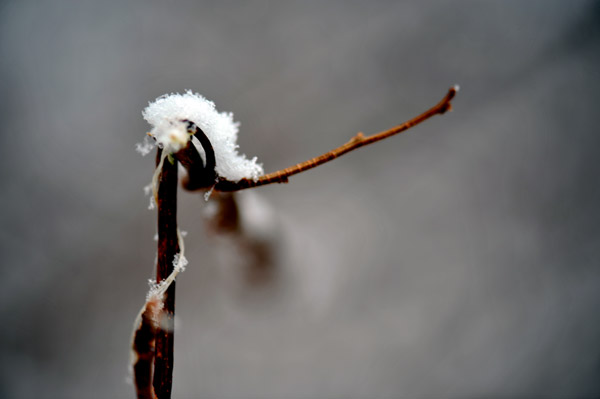 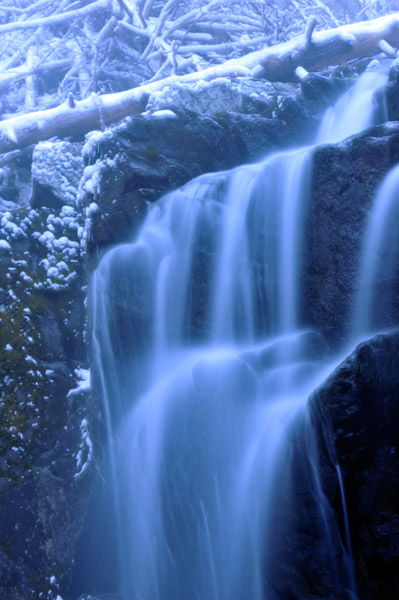 Wow, in this next shot, it could be hot and humid in the middle of the summer, couldn't it? Of course, it was frigid and the water was freezing. But without further context it would be hard to know what season the photo was taken in. 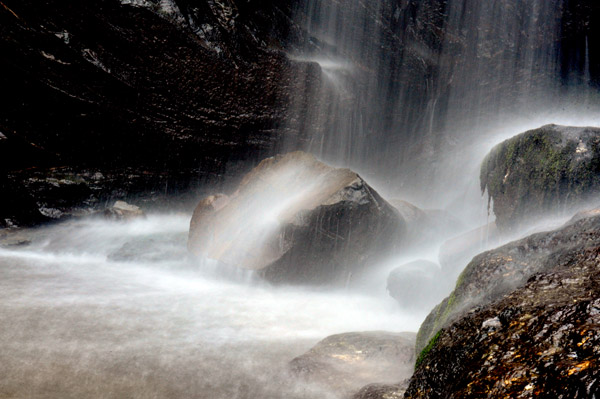 And yes, I do like taking pictures of waterfalls.