Why Garmin Has Lost Their Way 🔗

I've always been a fan of GPS technology, since it was first made available to consumers. Back in college, I saved up my money to buy a handheld GPS receiver: the Garmin GPS 45. It was a bit bulky, took forever to lock onto satellites, and plowed through batteries, but it was magical: it could tell me where I was, or how to get back to where I was when I last knew where I was. As an avid hiker, it opened up new possibilities for exploration.

Over the years, I've given Garmin a lot of money: tracking evolutions of both handheld GPS receivers and automotive GPS receivers. In the car, I went from an early black and white StreetPilot to my current one, which includes XM Radio, traffic, and weather, and can even say the actual names of roads (although sometimes with comical pronunciation). Garmin's GPS receivers have accompanied me on nearly every hiking, mountain biking, and kayaking adventure I've been on. I've always found Garmin's user interface to be best-in-class, so much so that even though my current car includes in-dash GPS, I continue to use the StreetPilot for its better software.

But, sadly, I think Garmin has lost their way.

They have lost their way in one fundamental way: their product map today can't be navigated. And this is ironic for a company that produces navigation tools.

Garmin makes GPS receivers in a variety of categories. If you look just at their automotive category, this is what it looks like currently: 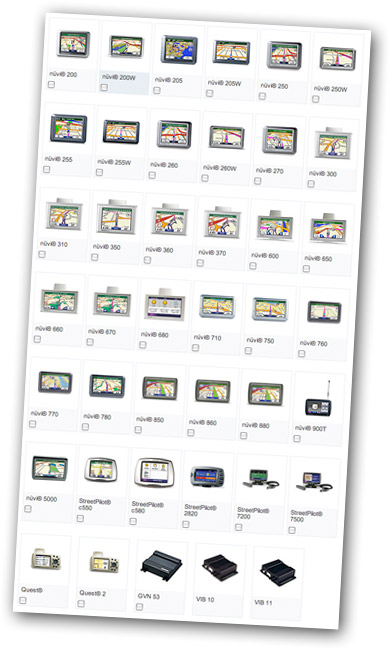 And this is absolutely, utterly insane.

There are 38 separate on-dash GPS receivers in their product line.

Some of the differences are subtle and sensible, while others make no sense at all. But when presented with this product matrix, how can you possibly decide which one is the best fit for you? In reality, the primary features (and underlying software) across all of these units are essentially the same. There is simply no reason for there to be such product diversity.

There is a company that went down this same path, and it almost didn't survive.

In the mid-1990's, Apple Computer's product line had begun to multiply, even as sales began to shrink. There were multiple PowerMac models and multiple Performa models. There wasn't much difference between them, and no salesperson could adequately describe how a Performa differed from a similar-looking PowerMac. (The difference was really in distribution and software bundles, a rather silly distinguishing factor that meant little to end consumers.)

When Steve Jobs returned to Apple, he could not figure out the product line. It was a huge matrix with seemingly-similar products. Consumers were confused. And by that point the products weren't all that different than Wintel boxes.

One of the first things Steve Jobs did when he returned to Apple was to slash the Macintosh product line from dozens of models down to three: iMac, PowerBook, and PowerMac. The iBook followed a year later, bringing the total to a sensible four. Four was a good number. You had a consumer laptop and desktop (iBook and iMac), and a professional laptop and desktop (PowerBook and PowerMac). With build-to-order, customers could configure a specific model to their delight, but the product matrix was downright simple and easy for anyone to understand. Generally speaking, you knew if you were a consumer or professional user, and you just had to decide between a laptop and desktop.

Apple has stuck to this product simplicity philosophy, and it has certainly been a contributing factor to their recent success.

High-level managers at Apple have said that the toughest part of their job is deciding what not to do. The natural tendency is for companies to begin branching out, spreading their engineering resources thin across an ever-expanding but undistinguished line of products (e.g., look at all the printers HP sells). But a few companies resist, putting their "A team" on each of a small number of products. It helps a company remain focused, it helps ensure that each individual product stands on its own, and it also drastically simplifies the marketing message.

I have watched with dismay as Garmin has gone down the "product bloat" path.

Now, more than ever, they need to simplify their product matrix and marketing message. Because they not only have their traditional peers to compete with (e.g., Magellan and automobile manufacturers), but they also are about to receive huge competition from smartphones. Garmin needs to differentiate themselves from these new market challenges, and produce a smaller number of products that offer an obvious experience and benefit unavailable in alternative products.

It should be alarming to Garmin that someone like me, who has owned their products from their inception and has been a passionate user, can no longer figure out what Garmin products to recommend to friends.