I've taken several road trips out west, and on each trip I've lingered in Colorado. Colorado is a nice place to linger. I'm glad that I lingered there for the first 13 years of my life.

On one road trip a number of years back, I spent several days camping and hiking in Rocky Mountain National Park.

Under the dim glow of a flashlight, I huddled in my tent the first night and pored over topographic maps trying to pick out a hike for the next day, eventually settling on Timber Lake Trail. In the distance, I could hear the sound of elk bugling. In fact, those elk bugled all night long. They were very inconsiderate elk.

The next morning, I packed up my tent, and learned from nearby campers that a black bear had been milling about by my tent for much of the night. I was completely oblivious to this. Apparently other campers were quite alarmed by the bear's proximity to my tent, but, naturally, had made no attempt to warn me, glad that the bear wasn't milling about by their tent.

I made my way to the trailhead, glad that I had escaped a more personal encounter with a bear, and was greeted by a posted sign warning that a mountain lion had recently attacked a hiker on the very trail I was about to hike.

In bold letters, the sign helpfully warned "MOUNTAIN LIONS FREQUENTING THIS AREA -- BE ALERT -- SOLO HIKING AND JOGGING NOT RECOMMENDED."

Although I had no intention of jogging, I couldn't help but notice that I was alone. 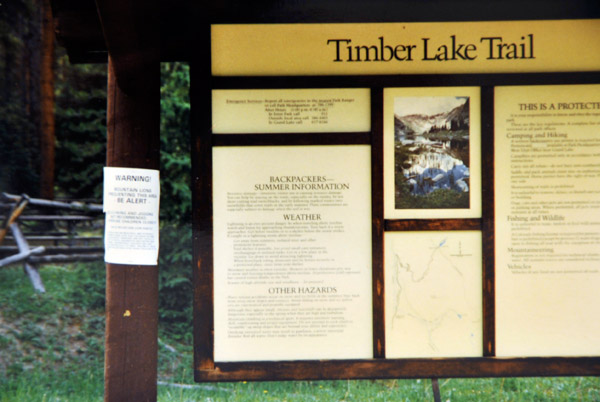 This led to a few minutes of consideration. On the one hand, there was a mountain lion on this trail picking off humans, especially solo hikers. On the other hand, I was skinny; why would a mountain lion bother with me? I probably survived the scary bear milling encounter for the same reason.

So I decided to chart ahead. I was there, and I was going to hike. I didn't drive through Kansas for nothing. For protection, I brought a road flare, and stashed it in my backpack. Evidently, I thought that if a mountain lion suddenly lunged towards me, in a split second I would have time to take off my pack, remove the road flare, strike it to ignite it, and then wave it in front of the lunging lion to scare it off.

So, yeah, it provided plenty of peace of mind.

Timber Lake is a 9.6-mile hike, with an elevation gain of 2,050 feet. The trail ends at 11,060 feet above sea level, in a meadow and glacial lake, surrounded by towering mountains and right on the intersection with the treeline. It's also fair to say that the trail ends in a postcard.

Most of the trail goes through dense forest, slowly climbing its way up.

During the hike up, I took a total of one picture. (The following photos were prints that were "scanned" by me aiming my digital camera at them, because I'm too cheap to buy a real scanner. So the quality ain't great. The original pictures were taken with a film camera. You can learn more about film cameras at your local Smithsonian museum.)

Here is a photo showing the trail: 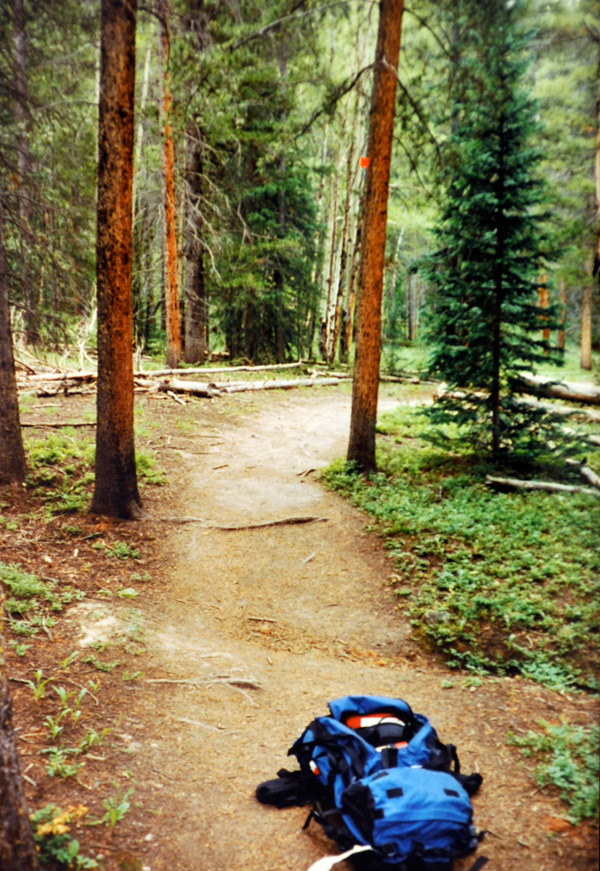 Why only one photo? I think I was nervous about getting mauled by a mountain lion. And nothing attracts mountain lions more than the casual sound of a camera's shutter releasing. It's like the sound of a can opener to a housecat. I figured as long as I was moving at an even pace (but not JOGGING, for heaven's sake! I read the warning sign -- at least half of it!), the mountain lions would leave me alone.

But, all kidding aside, I didn't linger because I was anxious to reach the top of the trail, and was worried about getting stuck above treeline in an afternoon thunderstorm.

The trail turned out to be a tease. Growing more exhausted, I kept expecting and hoping to see Timber Lake appear around the next bend. There were lots of bends; there was no Timber Lake. But, eventually Timber Lake made its debut. 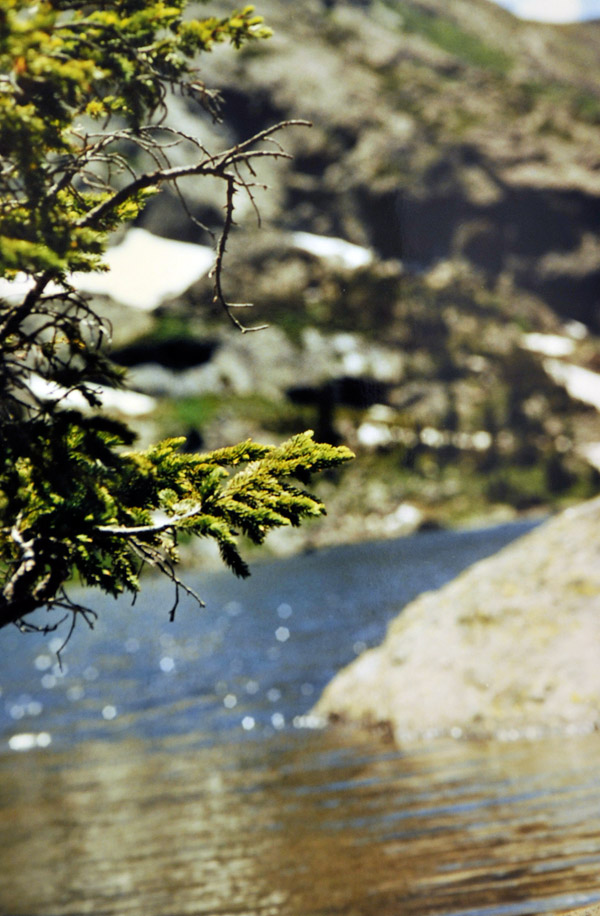 And it was worth the wait. There I was, in one of the most serene and scenic places I had ever been. There wasn't a soul around. Rocky peaks surrounded me and reflected off the crystal-clear water. Even though it was the middle of the summer, there were piles of snow around. It might have been chilly, if it weren't for the bright Colorado sun shining down. I made my way around the lake, snapping photos, and eventually hopped across stones to a big island of a rock surrounded by water. I sat on this rock for awhile, taking in the sights, sounds, and smells while munching on a granola bar or two. I noticed some movement in the rocks above, and counted at least a dozen bighorn sheep. I looked up at them, and they looked down on me. I couldn't help but be jealous; this was their home. 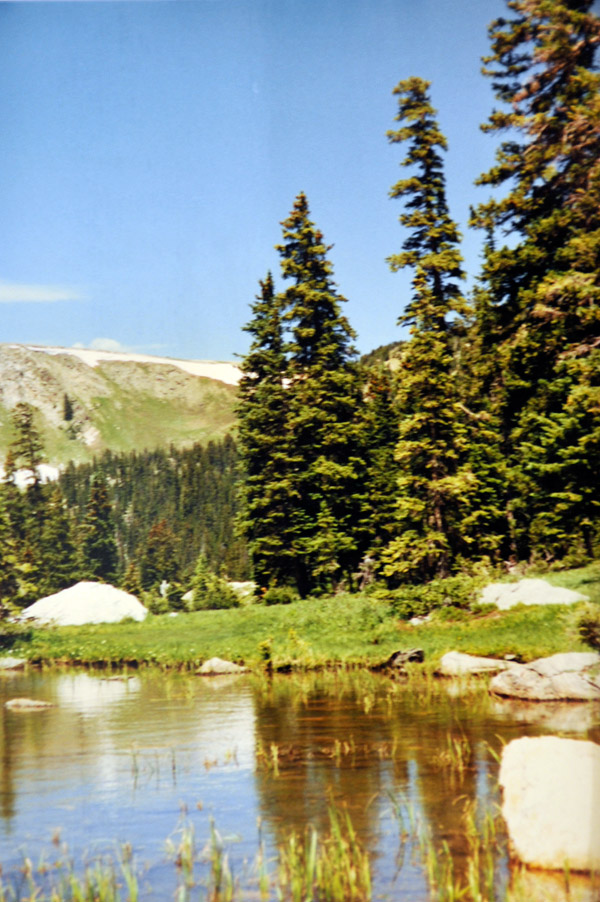 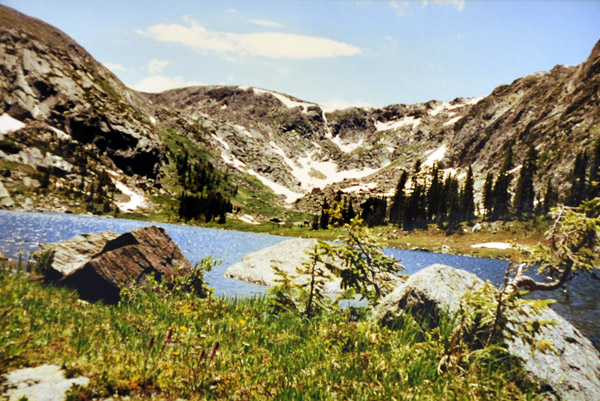 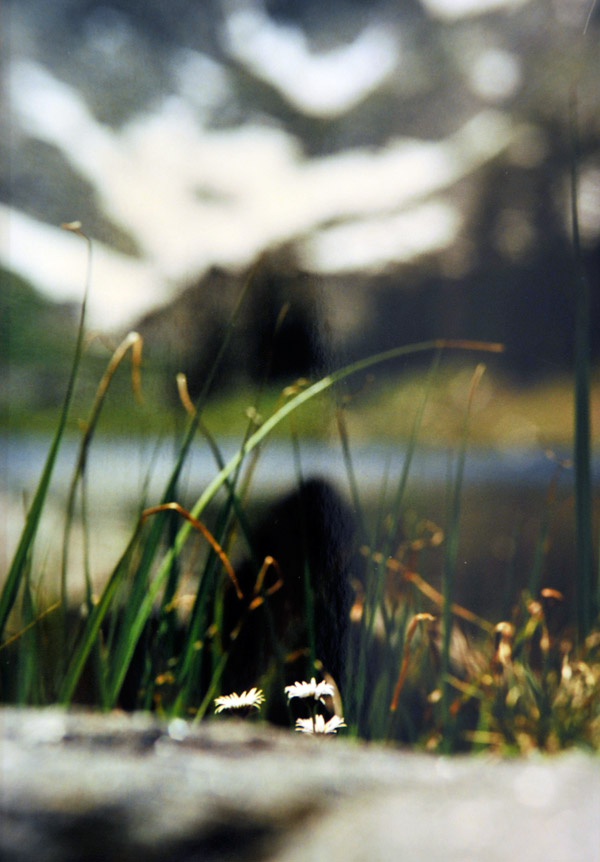 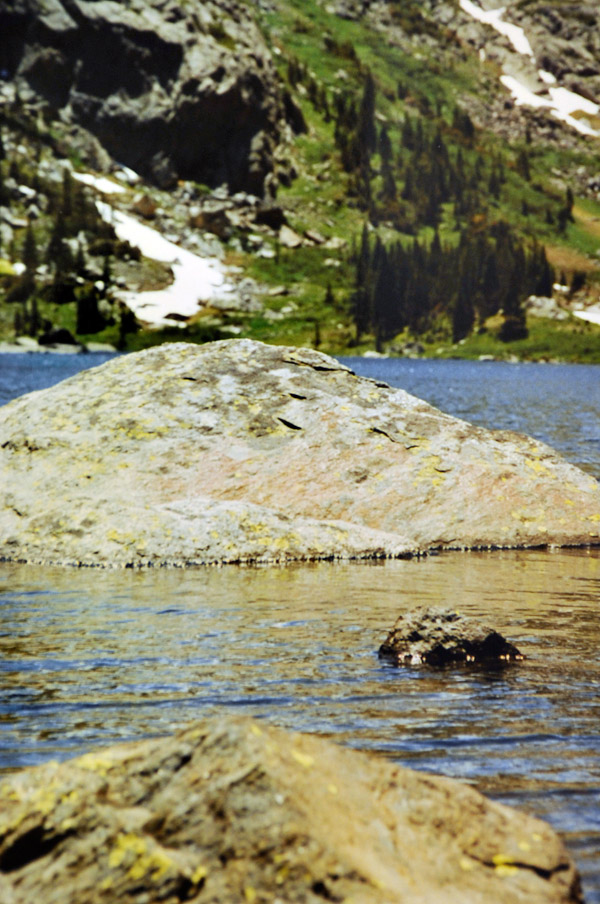 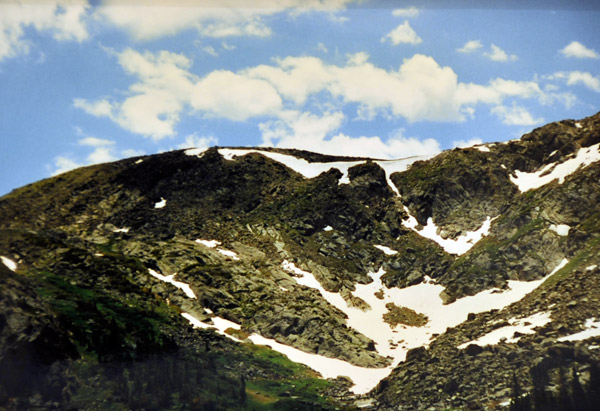 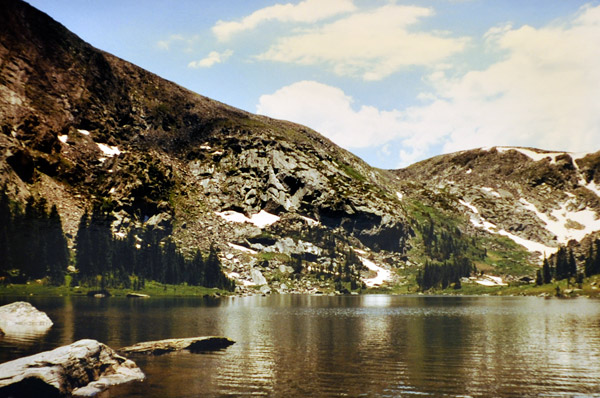 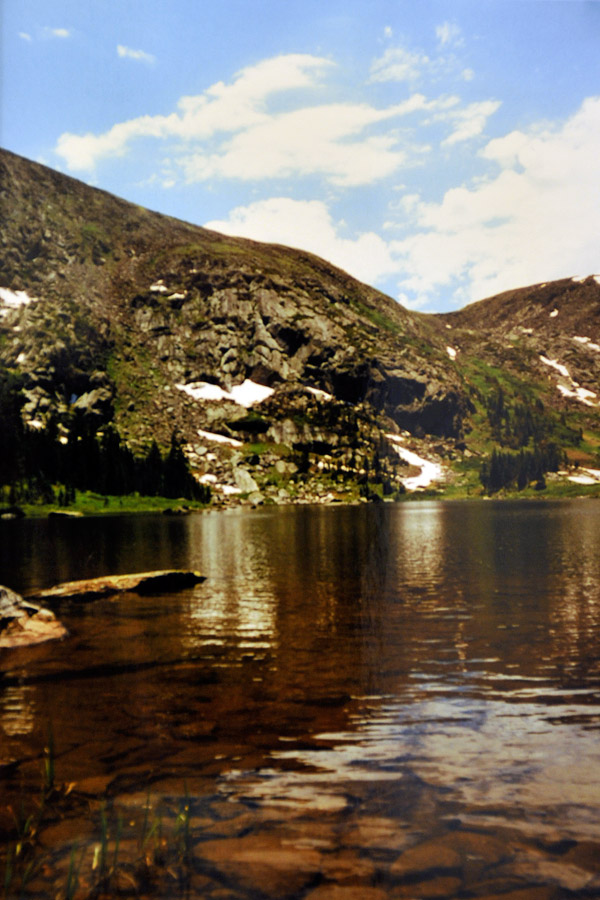 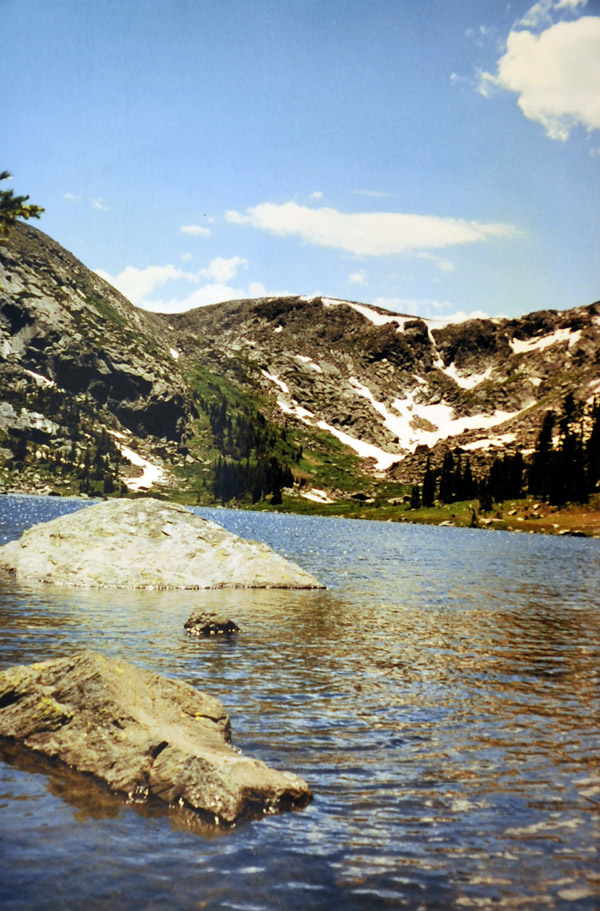 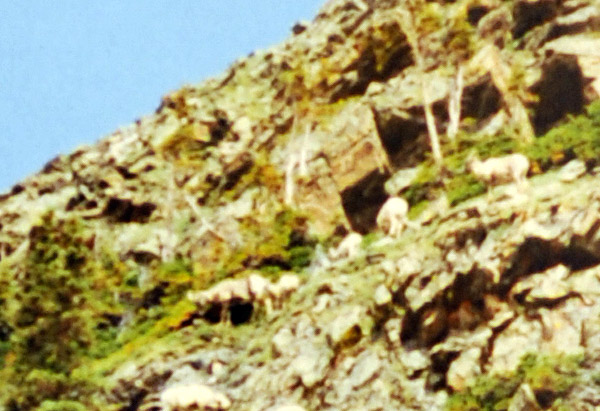