As a kid growing up, there were many toys I lusted after. For example, Radio Shack used to sell these electronic kits -- such as the "20-in-1 kit," which consisted of a board with resistors, capacitors, LEDs, and the like, wired to spring-loaded terminals; a bunch of wires of varying lengths; and instructions on how to connect the wires to the terminals in various configurations to make everything from an FM radio to a calculator.

To me, these were way cool. And for over a year, I lusted after the premiere electronic kit -- the "100-in-1 kit," as I recall. I tore the description out of Radio Shack's catalog and studied it night after night, looking at the picture and contemplating with amazement all the wonderful things that could be done with those transistors, resistors, and capacitors. I had no idea what a resistor or capacitor was, but that was a minor detail. I saved my pennies, and was finally able to buy the kit. That was one of the many toys I lusted after, and it was even educational, so that counts for something.

There were other toys I lusted after that I could never afford (or could never convince my parents to help pay for).

One of them was a remote-controlled car. They were generally found on a different page of the Radio Shack catalog. But the cheaper ones were wired remote-controlled cars, and I didn't want any of that. I wanted to be able to annoy my sister or the neighborhood pets wirelessly.

Sadly, my dreams of getting a remote-controlled car never came true.

One of the neat things about being an adult is that at some point, you earn enough money to have some disposable income, and toys that you once lusted after as a kid but could never afford are suddenly within reach -- and take considerably less reservation to purchase than, say, a real car, or a house.

I've occasionally thought about buying that remote-controlled car I always wanted as a kid, but always ended up remembering that I am, in fact, an adult.

But, thankfully my sister was considerate enough to give birth to twin girls, which has now provided me with the perfect cover to purchase toys I always wanted as a kid. After all, I can pretend that I'm purchasing them to play with my nieces. I come across as being a very considerate uncle! My nieces are a little over 2 years old and can barely form a two-word sentence, so I don't think they'll be able to point out that I'm simply using them for at least another year or two.

Of course, my nieces are girls (as nieces often are), and it might appear more appropriate to buy them toys such as dolls versus remote-controlled cars, but I really have no interest in purchasing or playing with dolls. That's not something I ever lusted after as a kid. So my new plan has some shortcomings, but I think it's still workable.

So, a few days ago, I decided to find out what exactly has happened in the world of remote-controlled cars since I lusted after them some 15-20 years ago.

I quickly discovered the most lustworthy battery-powered remote-controlled car on the market: the Traxxas E-Maxx.

The E-Maxx is a 1/10 scale four-wheel-drive monster truck model. It has two very powerful motors, and the motors are even fan-cooled. To be honest, I don't understand 80% of the terminology used by Traxxas to describe the E-Maxx. It has microprocessor-controlled speed control, two-speed electronic transmission, and some features that might give my Nissan Pathfinder (an actual car) a run for its money. And get this: it can go over 30 miles per hour. Not like those cheapo Radio Shack remote controlled cars, no sir.

So I bought it. And it arrived today. And I definitely felt like a kid as I tore open the box. I mean, I was going to wait to open it until my nieces were around, but I wanted to make sure it worked OK to prevent any possible disappointment.

The truck is much bigger than I expected. In fact, it's huge. To demonstrate the size, I placed a penny next to it and took this picture: 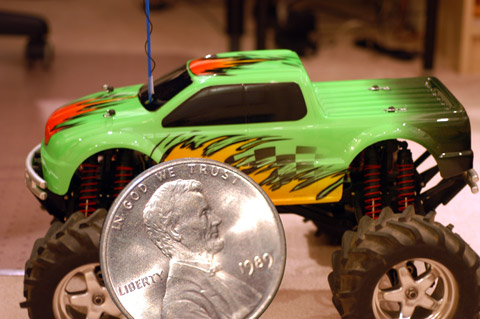 No wait -- drats! Foiled by persective again. That's not right at all. Silly camera lens. Here's another try: 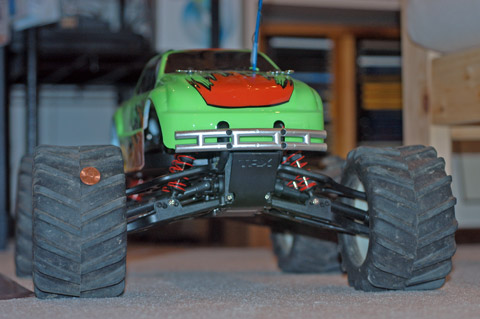 As you can see, this truck has some serious tires and serious suspension. Here's a look at some of its guts: 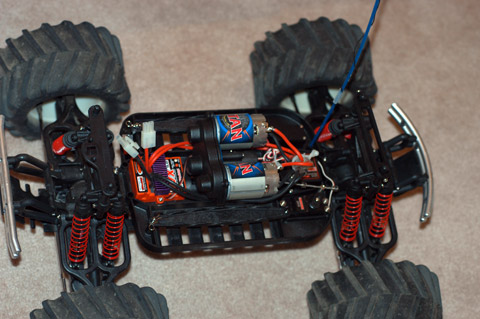 The thing runs on two rather large battery packs, which drain in about 15 minutes. I quickly discovered that it's not a good idea to use this truck inside a house. Tap the remote accelerator, and it lurches forward at 20 mph. And it has some heft. It's enough to put a dent in the furniture. In fact, it caught and dragged a chair clear across my kitchen floor, nearly taking the chair through the glass patio door. Heh. Thankfully, it has brakes and can stop on a dime.

Unfortunately, my plan my backfire yet, due to a clear warning on the box: 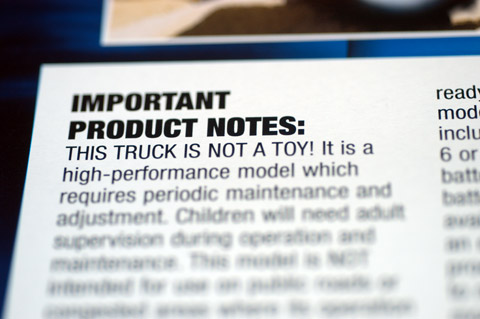 Not a toy! How dare they! How can I pretend that I bought the E-Maxx to play with my nieces if it's not a toy! I must destroy the box at once.

Oh, but wait -- if it's not a toy, then it's perfectly suitable for an adult to buy. Problem solved.

I took the truck out this evening to the Nature Preserve behind my house, where there are a number of dirt trails and conveniently-placed piles of dirt and wood chips. And man, can this truck fly! It seems I'm not very good at controlling it yet. But it's still in one piece.

So now I have a very cool toy, and I think I'll get some enjoyment out of it, and I know my nieces will too. (But they'll be too young for awhile to control it. Putting any 30-mph gadget in the hands of a 2-year old is not a good idea.)

Since I never did have an RC car as a kid, and was envious of those that did, I am now tempted to find the nearest school playground, and place the E-Maxx dramatically on the ground as the other kids open their mouths in awe. "Ha -- take that! What do you think about that now?" I might boast, as any nearby parents quickly grab their kids and run away.