The Best Backyard a Kid Could Ask For 🔗

A lot of my childhood was spent wandering around the mountains of Wyoming. When I was just a few years old, my parents purchased land in an isolated part of southeast Wyoming and built a rustic cabin. They ran out of money before the interior of the cabin was finished; knowing little about construction at that age, I found it very cool and not at all odd that the interior walls were fluffy and had Pink Panther on them. The cabin was surrounded by acres of mountains and forests -- a kid simply couldn't ask for a better backyard to play in than that. And for most weekends during each summer, we would make the trek to the cabin and I had dozens of wild acres at my disposal.

There was no running water and no electricity. You had to drive miles on a bumpy, dusty old dirt road to reach it. The cabin did have one toilet connected to a septic tank, but using the toilet was a luxury: it had to be filled manually with several gallons of water for each flush.

The cabin is still in the family, although with all of us living on the East Coast now, it sits solemnly in the woods, sometimes going well over a year without a human visitor. If the cabin were sentient, it would no doubt feel very lonely now, like a parent after the kids had grown up and moved out. But even without us, the coyotes continue to howl in the distance each night, deer graze in the nearby prairie, and hummingbirds dart through the aspens next to the cabin. And occasionally, a black bear wanders curiously by. 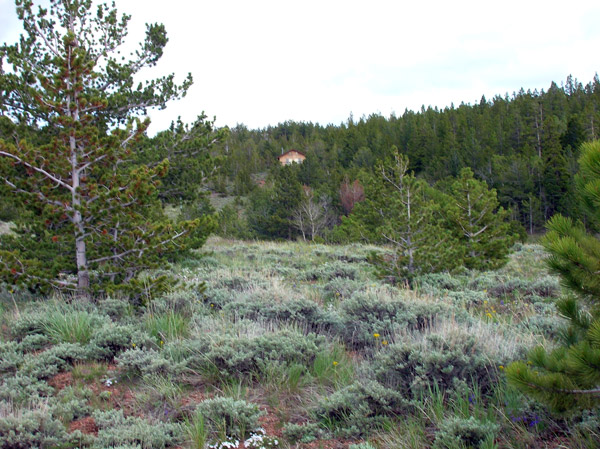 Just a few feet off to the side of the cabin is a tall pile of igneous rocks. I called this "chipmunk rock," because a friendly family of chipmunks had burrowed into the cracks of the rocks and made it their home. The chipmunks would eat peanuts out of my hand. (Apparently my parents were not too concerned about rabies back in those days.) My sister and I learned to recognize distinctive chipmunks, and gave them descriptive and distinctly non-politically correct names, such as chubby. We could identify the same chipmunks year after year and witness the young ones growing older, just as my sister and I grew older. This pile of rocks was also great fun to climb. 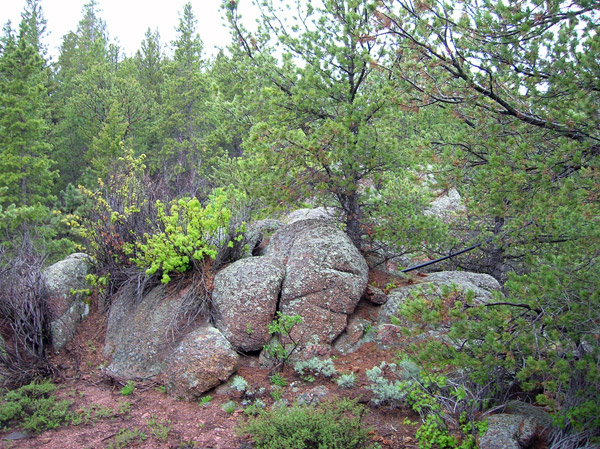 The rocks went pretty far back, climbing higher and higher, and reaching an apex with a drop of a couple dozen feet. I found a couple navigable paths to the top, and would climb up high and sit at the top, feeling like I owned the world. (Apparently my parents were not too concerned about gravity in those days.) After seeing hieroglyphs in the rocks during a trip to Mesa Verde, I decided that I, too, would carve hieroglyphs on the top of the highest rock for future generations to marvel and enjoy. I spent hours chipping away at the rock with stones, in a frustratingly fruitless attempt to make some kind of identation, but was never able to leave any meaningful mark. I quickly moved on to other ventures, such as building a trail up the side of a mountain (an ambitious effort that spanned several summers), or attempting to dam a stream to make a swimming pool (another fruitless effort that lasted only one weekend, but was a heck of a lot of fun and left me thoroughly covered in mud, the apparel of choice for a young boy).

We had several large plastic containers to hold water, for drinking, cooking, washing, and filling the toilet. The only source of potable water was a hand-pumped well about a mile or so away. My sister and I held this well in high regard. It towered majestically above us; we had to jump up and grab onto the handle, allowing our body weight to slowly pull it to the ground. The rusty handle would groan and squeel with other-worldly metallic sounds. After a few jumps and pumps, water would slowly start to trickle out of the well, brought up from deep below the ground. This water was simply the finest tasting water in the world, and delectably cold, even on warm summer days. After jumping on the handle, we would quickly rush and tilt our heads under the faucet, capturing a few uncontrolled splashes of water in our mouths, and often our noses, too. 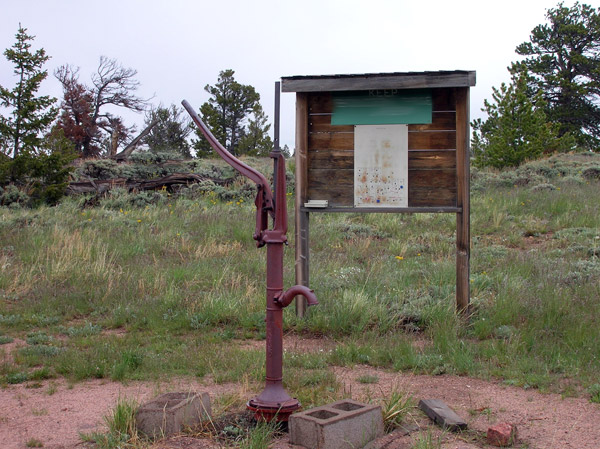 A large prairie sprinkled with pine trees and interesting rock formations spread out down a hillside in front of the cabin. This provided ample opportunities for adventure for my sister and I. We would find downed branches and use them to build makeshift tee-pees. We would play "Cowboys and Indians," lobbing pine cones at one another. Further down the valley was Beaver Pond, a stream that had been dammed by beavers. We would stand by the side of the pond and look for tadpoles. There were all kinds of places to explore.

The view out the front of the cabin was simply astonishing - it went for miles and miles and miles across plains, with a mountain range rising at the horizon. Often, there was a complete and utter lack of sound. No cars, no airplanes, nothing. At other times, aspen leaves blowing in the wind would make a soft but distinctive symphony of tinkling sounds. The rocky soil had a red tint to it. And always, the smell of sagebrush permeated the dry air.

And at night, the sky became a deep, dark black, littered with thousands of bright stars. You could see the Milky Way. You could even see some man-made satellites slowly arcing across the sky. During meteor showers, the view was better than any fireworks display. Thunderstorms would occasionally pass through; they were loud and violent and quite frightening, but were beautiful to watch when they passed through the plains in the distance.

One of the most fascinating things to me, though, was a shiny dot that glowed brightly on top of the highest mountain peak in the distance, dozens and dozens of miles away. On sunny days, it sparkled like a diamond. Sometimes this diamond would glow brilliantly just as the sun set, receiving the last rays of the day's sunshine. It was clearly out of place and not part of Mother Nature, and I found myself often staring at it, filled with curiosity over what it was. I knew it had to be manmade -- but thought there was a good chance it could even be from out of this world.

But my dad finally spilled the beans, and told me that it was a telescope. He explained that people lived at the telescope, and spent the days sleeping and the nights working. This was so cool to me: I was fascinated that people could be on the opposite sleep cycle of everyone else. To be awake all night long -- heck, that was every kid's dream.

Knowing that the shiny dot was a telescope raised as many questions as it answered. What things did the astronomers see? What was the view like from way up there? Who got to live there? There must have been something incredible to see to make them stay up all night!

Years passed, we moved East, and the bright dot glowing in the distance faded into a distant memory.

But I recently remembered that glowing beacon and realized the Internet could help answer so many of the questions I had as a kid.

It turns out, that glowing beacon is the Wyoming Infrared Observatory (WIRO), a 2.3-meter telescope operated by the University of Wyoming and located on the summit of Jelm Mountain, 9,656 feet above sea level. The telescope was constructed in 1977, and has been in operation ever since. It took a prime perch of land that had previously been used by the Forest Service as a fire lookout station. 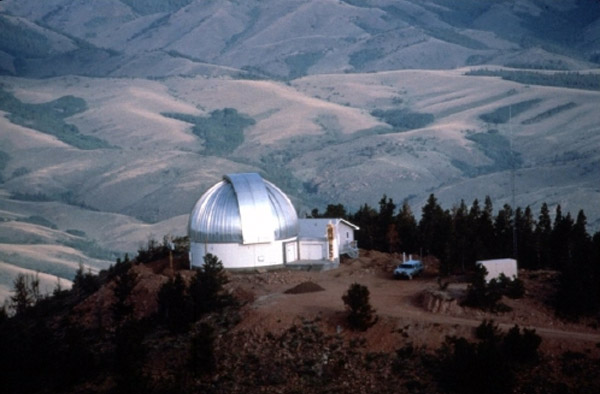 (Photo by the University of Wyoming.)


While the observatory has excellent views, its location on the peak of the mountain pits it against weather that is at times tempestuous. Winds can exceed 100 miles per hour, and temperatures dip below -40 degrees Fahrenheit in the winter. A snowcat is the only way to reach the observatory for much of the year. In the summer, we would often see lightning strike the observatory from our cabin.

I had imagined that the observatory was staffed by dozens of scientists in white lab coats, living in what surely must be a high-tech environment.

The reality is that it's usually staffed by a couple of graduate students, and the living quarters are spartan at best, not too much nicer than our bare-bones cabin.

But it must be an adventure to spend some time on top of that mountain, living at the crossroads of the beautiful Wyoming land and whatever mysteries lie in the deep depths of space above.