In early June, I took a quick vacation to Las Vegas, once again staying at Skylofts at MGM Grand. On a past trip, I wrote a review of Skylofts here.

I really enjoy visiting Las Vegas -- there is so much to see and do. One highlight of this trip was visiting the brand-new Picasso's Ceramics exhibit at the Bellagio Gallery of Fine Arts. This exhibit recently replaced the Ansel Adams exhibit that had been running at Bellagio. I was familiar with Picasso's paintings, but had not appreciated the depth of his artistic excellence. The Gallery at Bellagio is a great place to immerse yourself in quiet solitude and escape from the hustle and bustle of one of the fastest-growing cities in the world.

And, as a bonus, Cafe Gelato is right next door to the gallery -- which sells what I'm determined is the best banana milkshake in the world.

I also attended four shows while in Vegas. On the first night, I saw a show by Howie Mandel (opened by comedian John Mendoza) at the MGM Grand. This was a very interactive and humorous show. I do not normally see comedy acts, but chose this since it was at my hotel and I knew I would be tired after a long day of flying. It was worthwhile.

On the second night, I saw Cirque du Soleil Love at the Mirage, Cirque's newest show based on the music of the Beatles. This was my third time seeing this show, and I could easily see it three more times -- it's that great. There is so much going on that the show seems different each time. The audience was spellbound through the entire show.

On night three, I saw Spamalot, a broadway transplant that had just made its way to the Wynn in a newly-designed theater custom-made for the show. Spamalot stars a talented cast including John O'Hurley, who played Elaine's boss in Seinfeld, as well as a live, 14-member orchestra. It is based on Monty Python's Quest for the Holy Grail. I think the best performer was Nikki Crawford, who played the "Lady of the Lake" and did a perfect job satirizing the role of a diva. She had quite a singing voice. Numerous changes were made to the Las Vegas version of the show. You can read a review of the show here.

On the fourth night, I saw Cirque du Soleil O at the Bellagio, still one of my favorite Cirque du Soleil productions. This show has not changed much since its debut. Like most of Cirque's productions in Vegas, every show (twice a night, five days a week) is sold out, with a long "standby" line.

Each time you leave your suite at Skylofts, a contingent of unseen housekeepers and butlers "reset and restock" the room, cleaning it, restocking beverages and snacks, refilling the ice bucket, or leaving evening desserts. Some of the desserts are shown below. 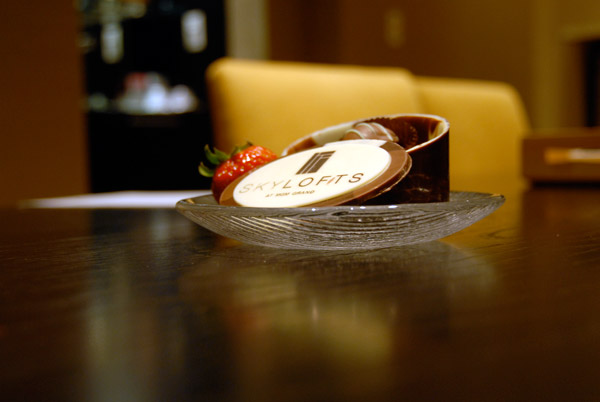 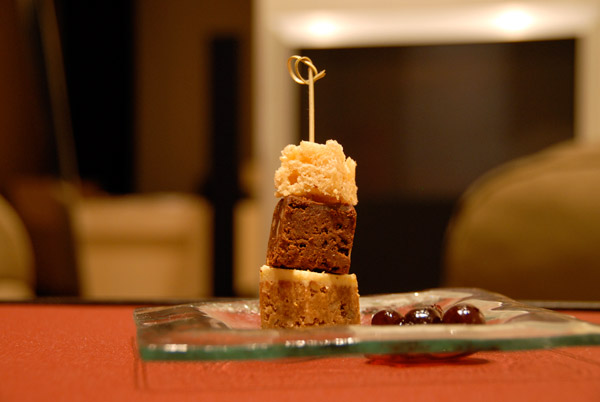 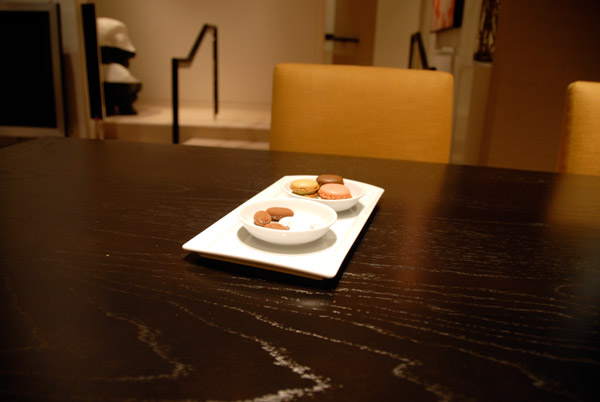 A shot from the bathroom, showing a flat-panel television (one of five in each one-bedroom loft) hidden behind the mirror. 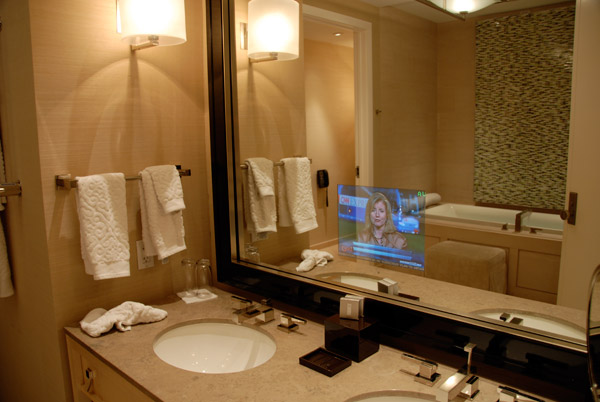 A picture of the bedroom. 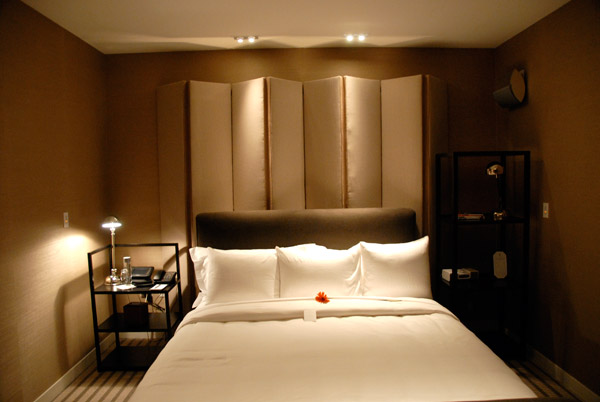 Skylofts is located on the top floor of the MGM Grand, nearly 30 stories high above the Nevada desert and Las Vegas strip. Each loft has great views out a wall of massive, two-story glass windows. My loft included a great view of the Las Vegas airport, allowing me to watch airplanes landing. 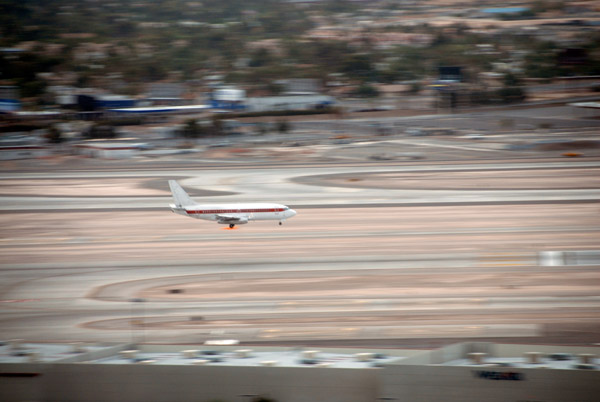 A shot from the lower level of the loft. 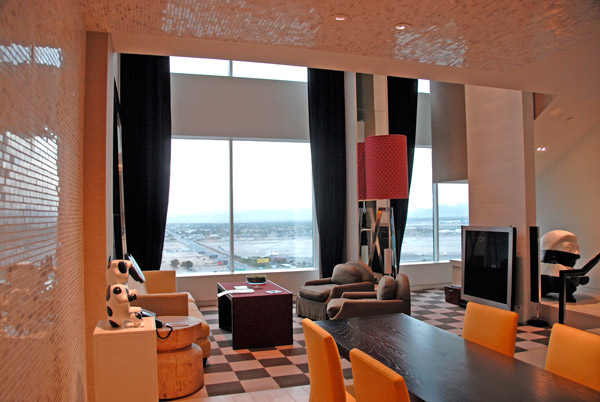 The Las Vegas Monorail departs the MGM Grand station, as it prepares to switch directions for a return back down the strip. The monorail has been somewhat controversial; it is expensive, and located behind strip hotels, requiring a long walk to get to the stations. But it's still a convenient way to get from one end of the strip to the other, and I rode it quite frequently. For the summer, the Las Vegas Monorail lowered the price of a one day unlimited pass from $15 to $8. However, they kept the price of a 3-day pass at $40. What are they thinking? Who on earth would continue to buy the 3-day pass when you can buy three 1-day passes for $24? But then I realized that many people riding the monorail might be drunk, dulling their math skills. Maybe this wasn't an oversight. 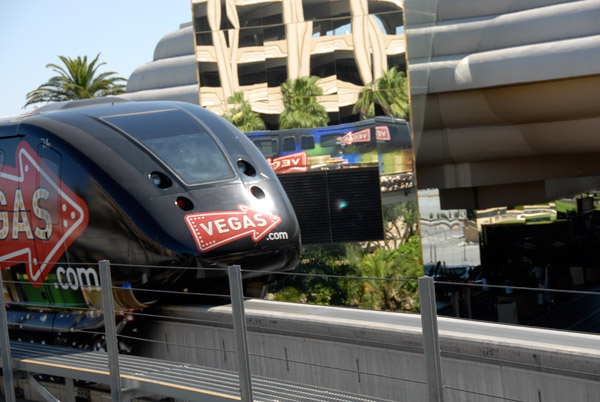 Another shot from the monorail station at MGM Grand. 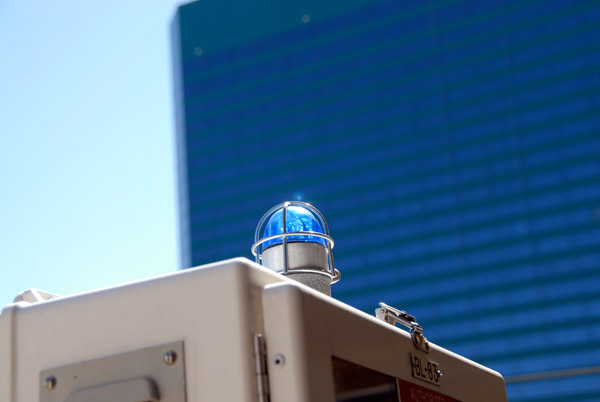 Las Vegas will never be finished; there is constant large-scale construction going on all over the city. This photo shows CityCenter under construction in the distance. At a cost of over $14 billion, CityCenter is reportedly the largest privately financed development in the U.S. It is located between Monte Carlo and the Bellagio. It is fun to watch the construction underway at CityCenter, a new tower at the Venetian, and other construction projects throughout the city. Construction occurs around the clock, and as the steel skeleton of the buildings rise higher and higher towards the sky, the lower levels start to fill in and be finished -- the model of efficiency and pipelining. 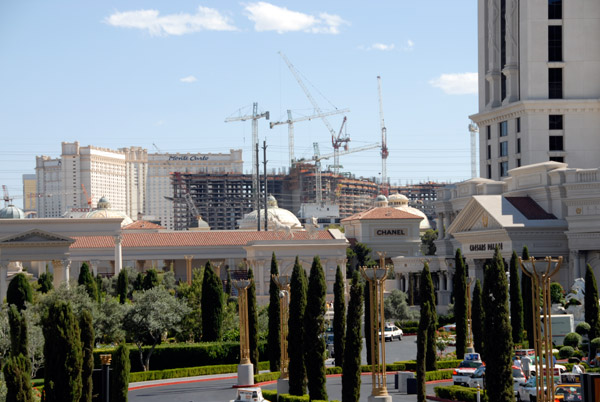 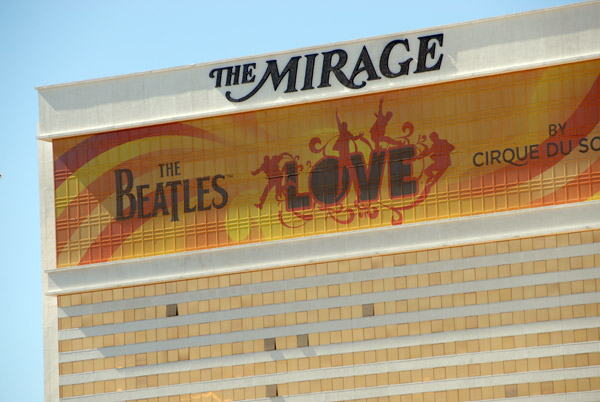 Elton John continues to take over Caesars Palace when Celine Dion is on vacation. I saw Elton John's Red Piano show at Caesars Palace on a previous trip, and he still puts on a great show. Signs throughout Caesars Palace announced that Celine Dion will only remain through the end of the year, with Bette Midler scheduled to take her place as the resident diva early next year in the behemoth Colisseum theater. So, if you're a Celine Dion fan (and I'm certainly not), you better hurry and grab one of her exorbitant $400 tickets. 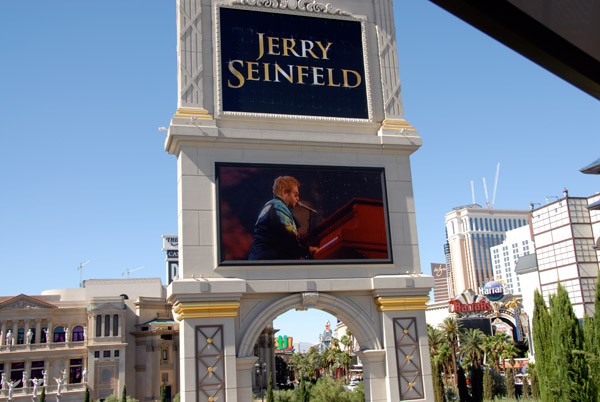 Two timelapse shots from inside the Forum Shops at Caesars Palace. 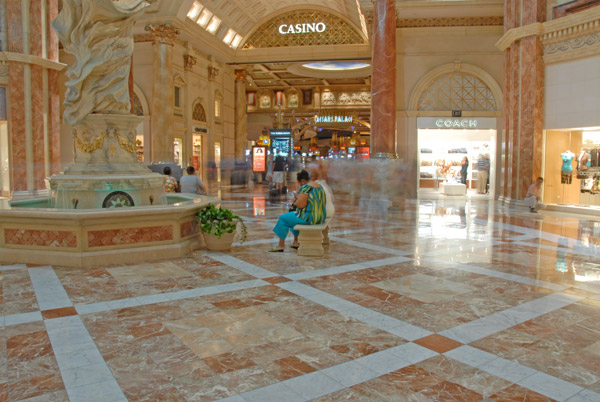 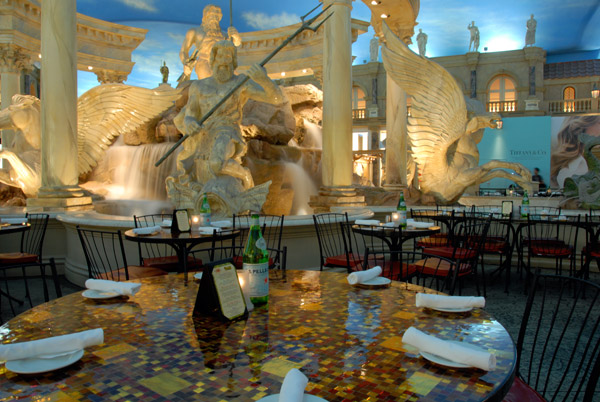 The beautiful lobby of the Bellagio. 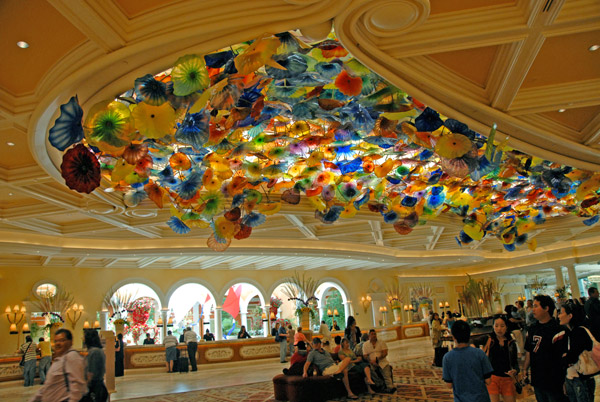 The Bellagio Conservatory had recently been transformed to its late-spring theme, celebrating nostalgia from Route 66. 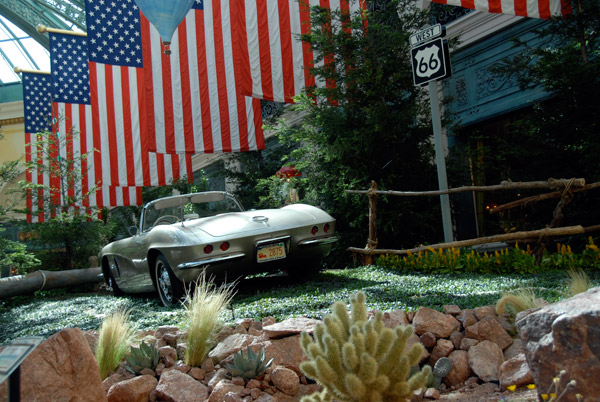 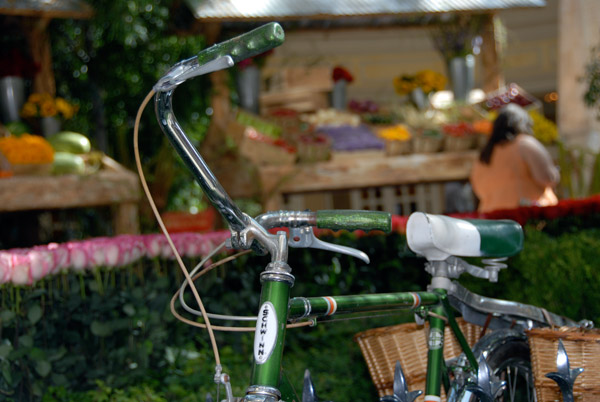 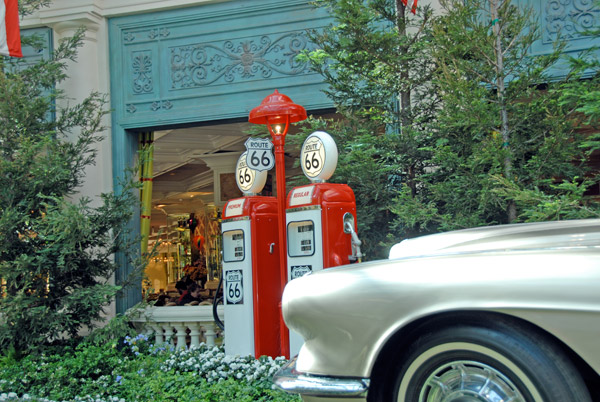 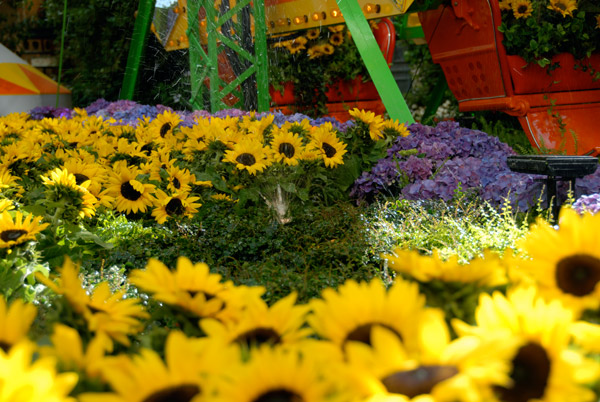 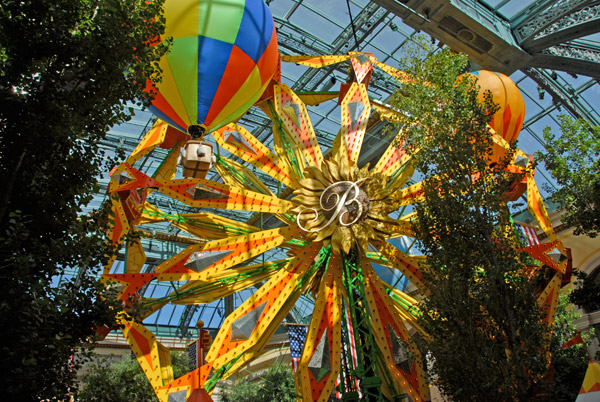 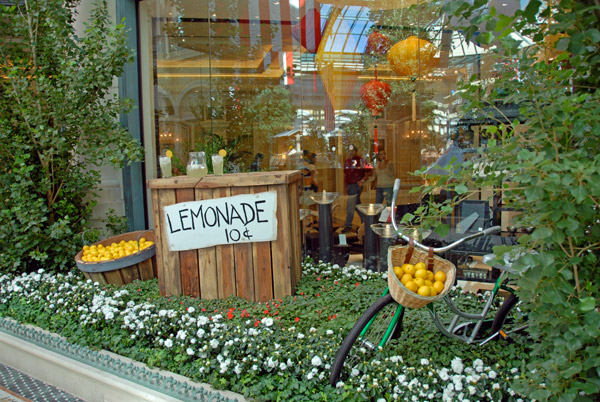