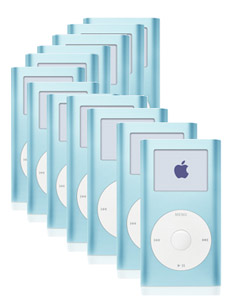 Apple announced their second fiscal quarter earnings today, and they were quite good, with total revenue coming in just below $2 billion. Of note, Apple sold 807,000 iPods in the past three months -- even more than in the popular Christmas quarter. (58,000 more iPods were sold this past quarter than Macintosh computers.) Apple has sold over 2.5 million iPods to date. Apple is having serious problems keeping up with iPod Mini demand, and does not expect to catch up with demand until late summer. The iPod looks like the Sony Walkman of the 21st century.