Desktop Picture of the Day: Whiteoak Canyon at Night 🔗

I usually don't publish high-resolution versions of my photos on this blog, but if you'd like a high-res version of the following photo, click on it for the full-size version. 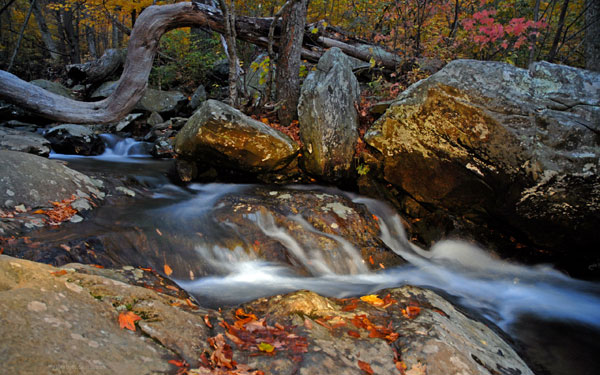 This is one of the photos I use in my "desktop picture rotation." I took it on the Whiteoak Canyon trail at Shenandoah National Park. (Feel free to use it as your own desktop picture if you'd like, but commercial use is prohibited.)

From the photo, you can probably guess that it was shot in the fall. What you might not be able to guess is that it was pitch dark when I snapped this picture.

I used a combination of a very long shutter speed (30 seconds) and a flashlight to "paint" the scene evenly with light. (Well, mostly evenly -- you can see that the white water towards the bottom center of the frame is particularly bright; that wasn't an accident.) I experimented by taking quite a few shots until I was pleased with the result. I was trying to make it appear that the water itself might be a light source, in a subtle way.

I like the color and warmth of the final result. This really isn't a picture you could take during the day. It would have been even cooler if I had "light-painted" the white water further upstream during the exposure. But I probably would have broken my leg rushing upstream in the dark to do that.

I just came up with another idea that would be fun to try sometime. What if I took a (waterproof) flashlight and dropped it in the stream? I would attach a string to the flashlight so I'd have a chance of reclaiming it before it floated too far away. It would be interesting to see what kind of effect that would generate in a long-term night exposure as the flashlight negotiated the rapids. Hmm....