How has Apple been doing lately? I dug up old earnings statements from the past few years, and plugged some numbers into Excel. The iPod, of course, has been somewhat of a successful product for Apple. (Perhaps you've heard of them.) I couldn't find data for several quarters early in the iPod's life, but as the graph shows, the number of iPods sold each quarter has been increasing. Things really took off within the past year. So far, there's no sign of slowing sales, but I'm not naive enough to think that the recent growth rate will continue. 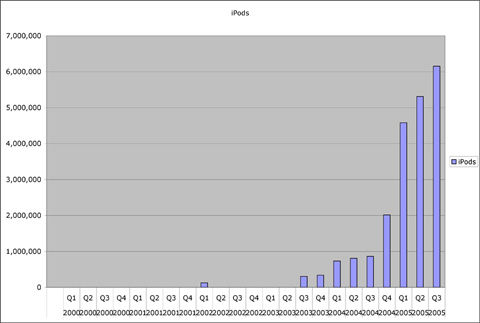 I'm more interested in sales of Macintosh computers, because they've always been Apple's bread and butter. As this graph shows, unit sales of the Mac have been enjoying a steady growth over the past couple years (with some seasonal fluctuations). This past quarter's sales of Macs reached a high not seen since the heady days of the original iMac, back in 2000, and pre-9/11. Apple's year-to-year computer growth rate in the past quarter was over 35% -- over twice the growth rate of the rest of the computer industry. This means that Apple is gaining market share at the expense of its rivals. Data from the past several quarters shows that there might be something to the "iPod halo effect" that analysts are fond of discussing. 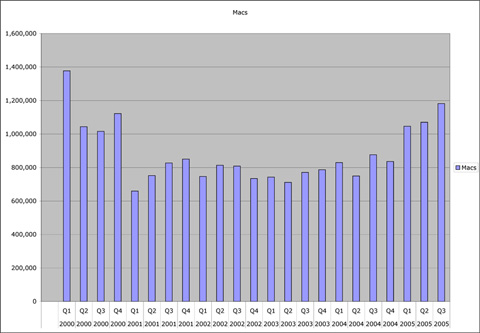 How have Mac and iPod sales affected Apple's revenue? Apple can clearly thank the iPod. Phenomenal sales of the iPod over the past year have driven Apple to reach the highest quarterly revenues in the company's history. This upward trend in revenue is something uncommon for a tech company over the past few years. 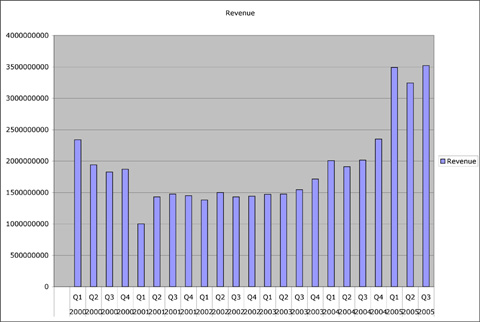 Higher revenue usually means higher profit, and you can see that Apple profit has surged over the past year as well, again largely due to the iPod. Apple's quarterly revenue dipped to $1 billion in Q1-2002, but in the past quarter, Apple's profit shot up to $320 million, almost a third of that low-water-mark for revenue. Apple is a much bigger company than they were several years ago. 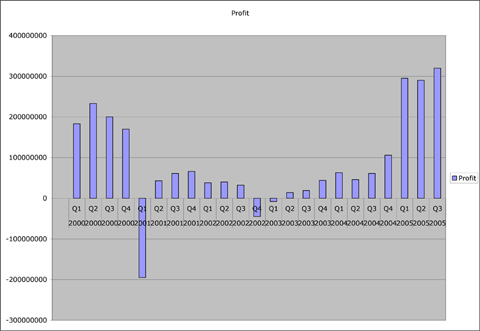 Increasing sales, revenue, and profit... What about the stock price? This graph shows what Apple stock has been doing the past five years. 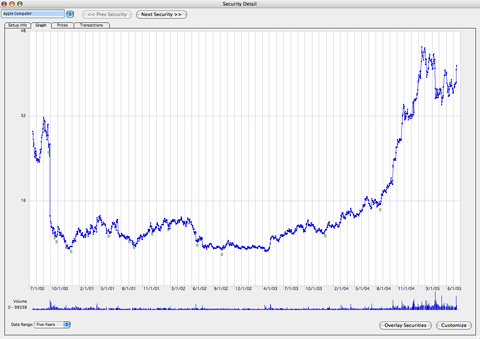